The Canadian government is trying to walk a fine line when it comes to its relationship with China, especially in the volatile context of the current U.S.-China trade battle.

Whether that line even exists is a real question, as Canada has to balance its relationship with its closest ally (the U.S.) and concerns about Chinese trade practices with the upside of increased access for Canadian exports to China’s enormous market.

The relationship with China could take another hit in the coming days, as Canada is reportedly looking at implementing its own tariffs on steel from China to minimize collateral damage from the U.S.-China tariff escalation on Canadian steel companies, according to Bloomberg.

On top of all of this, the federal Liberals have made labour, gender and the environmental issues — a ‘progressive agenda’ — a priority in exploratory trade talks with China that were launched in the fall of 2016.

In agriculture, the Canadian Agri-Food Trade Alliance, which represents export-oriented sectors of Canadian agriculture, listed the launch of formal trade talks and a deeper Canada-China trade relationship among its top priorities at an end-of-session press conference held on Parliament Hill last week.

In addition to selling more canola, beef and other commodities to China, the Chinese are also interested in Canadian farm machinery and technology reduce labour costs and improve farm productivity.

“I see a lot of opportunity to sell this technology or equipment to China,” observed Lu Xu, Consul General of the People’s Republic of China in Calgary, speaking with reporters during her visit to Canada’s Farm Progress Show at Regina, Saskatchewan, last week. 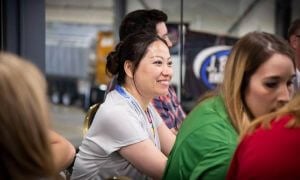 However, she quickly points to the Trudeau government’s “progressive agenda” as an impediment.

“Without that progressive agenda, it can work,” says the Consul General. “We understand why they raise these concerns, but China is on a different stage of development, so probably the Canadian standard is not suitable for the Chinese society. That’s why we have a different view over this agenda.”

Lu’s visit marked the first time a Consul General from China has attended Canada’s Farm Progress Show. She was also hosted on farm tour around Regina, after which she spoke about having full confidence in the quality of Canadian production.

Listen to Lu Xu, Consul General of the People’s Republic of China in Calgary, discuss her observations from the Farm Progress Show, the trade relationship between Canada and China, and the Chinese government’s perspective on the tariff escalation with the U.S.: