It’s not necessarily the happiest of discoveries, but it’s a first-of-its-kind discovery, nonetheless.

Work out of the University of Guelph has confirmed Group 14 resistance in waterhemp at multiple locations in Ontario. What’s more, Dr. Peter Sikkema’s research team, including graduate student Lauren Benoit, has also confirmed waterhemp with cross-resistance to Groups 2, 5, and 9, as well as 14. 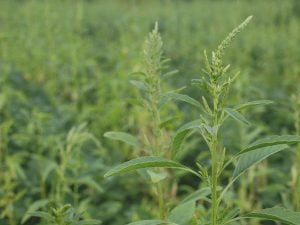 Previously, in 2014, a waterhemp population in Ontario was confirmed resistant to atrazine, glyphosate, and Group 2 herbicides.

Last year, Sikkema’s team completed a third waterhemp survey and collected seed samples from 17 fields across Ontario and Quebec. The samples were grown in the greenhouse and tested for resistance to atrazine (Aatrex), imazethapyr (Pursuit), glyphosate, and lactofen (Cobra). Some of the samples that had lactofen applied showed regrowth about 14 days after treatment.

“This development continues to limit the control options for waterhemp that farmers have, and reiterates the need to use integrated weed management strategies including proper herbicide stewardship practices,” says Sikkema “Tank-mixing and rotating effective modes of action is strongly recommended to reduce the development and slow the spread of resistance.”

Since 2015, Sikkema’s team has surveyed 76 sites across Ontario and Quebec. The sites with confirmed glyphosate resistance are located in Essex, Chatham-Kent, and Lambton counties, and the southwest corner of Middlesex county, as well as Quebec. All of the populations with Group 14 resistance also have resistance to Groups 2, 5, and 9.

Of the fields surveyed:

Multiple-resistance waterhemp will be a larger problem form soybean producers. The Group 15 herbicides (Dual, Frontier, or Zidua) plus metribuzin applied pre-emergence provide good control. Post-ergence, Reflex and Liberty (in Liberty Link soybean) are the best options, but should be used in a two-pass program. Research from Mike Schryver shows 95% control of waterhemp using Boundary followed by Liberty in a two-pass program.

These research findings were made possible by the work of previous graduate students, Brittany Hedges and Mike Schryver. Funding was provided by Grain Farmers of Ontario and through Growing Forward 2.