Not only do dry soil conditions hamper seed germination, they also raise the risk of fertilizer toxicity for seedlings after they germinate, especially in a sensitive crop like canola.

That means rates of fertilizer placed at seeding last year or the year before might not be safe this year, explains Don Flaten, soil scientist at the University of Manitoba, in this Canola School episode.

And with canola seeding well underway in the driest parts of the prairies, fertilizer toxicity could be the culprit if there are unexpected plant stand problems when the crop emerges.

“Canola is one of our most sensitive crops, and dry weather and dry soil conditions give us lots of problems because we don’t have much water to dilute the fertilizer, we don’t have rainfall percolating through the soil to wash fertilizer away from the seed row, and we also end up with a crop that’s struggling because of poor moisture conditions and is more vulnerable to that kind of toxicity problem,” he says.

Soil type, machinery (how fertilizer is placed and spread), and nutrient toxicity are also factors in the equation to determine the maximum safe rate of fertilizer at seeding.

While phosphate is certainly safer in the seed row than nitrogen or sulphate, Flaten notes the rule-of-thumb (in Manitoba soils) is to not exceed 20 pounds per acre (or around 40 pounds of 11-52 per acre).

“Where you have a combination of factors like dryness and a seeder with wide row spacing and narrow spreading behind the rows, even 20 pounds per acre can cause quite a bit of toxicity problems,” he notes. 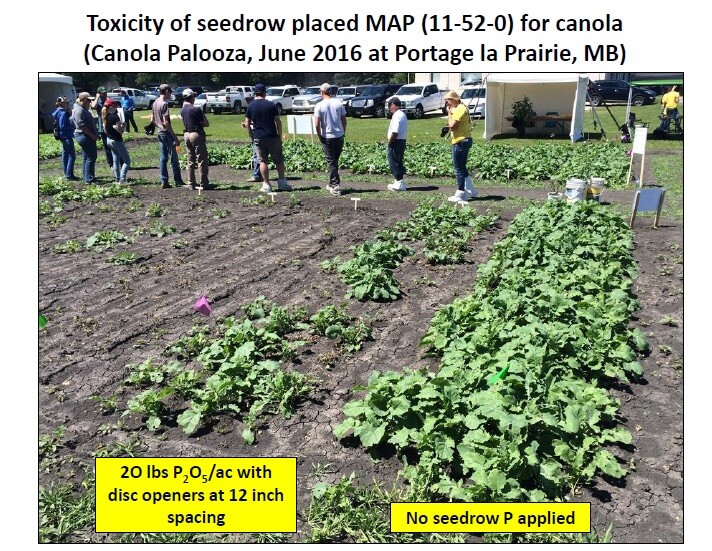 Related: Keeping P & K in the Bank as Soybeans Grow in Canola Rotations

Seeding rate is another factor to consider, with the trend toward lower rates to save on seed costs resulting in a smaller buffer for seedling losses due to toxicity.

Flaten discussed the risk of fertilizer toxicity with RealAgriculture’s Kelvin Heppner at the U of M earlier this week: