The Manitoba Agricultural Hall of Fame will officially announce its inductees for 2018 later this week, however, the list of individuals to be recognized by the hall was made public today.

It includes four individuals who have made significant contributions to agriculture in the prairie province, and beyond.

Here are this year’s inductees (background provided by the MB Ag Hall of Fame): 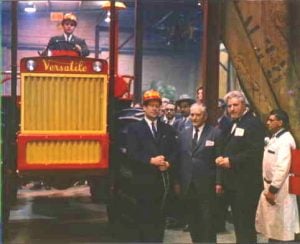 Peter Pakosh, (third from right) unveiling a new Versatile D118 at a plant expansion ceremony in 1967.

The Hall of Fame will officially announce this year’s inductees at its annual meeting in Portage on Wednesday at 1pm.

The induction ceremony will be held on Monday, June 18 at the Victoria Inn Hotel and Convention Centre in Winnipeg.