A former senior advisor for a Canadian trade minister has published a report that will raise some eyebrows and counter a common narrative surrounding Canadian dairy and the supply management system.

“Milk prices in Canada are lower on average than in Australia, New Zealand, and the U.S. Canadians currently pay less on average than Americans for butter, yogurt, and cheese,” reads the report.

The 44-page document was co-authored by Export Action Global founders Adam Taylor and Fion Anastassiades (find the report here). Taylor served as the senior advisor for Ed Fast, who was Canada’s trade minister (Conservative) from 2011 to 2015, a span that included negotiations for the Canada-EU trade deal and the original Trans-Pacific Partnership. Prior to that, Taylor was the national research director for the Canadian Taxpayers’ Federation.

“We’ve always been told this as though it’s actual, verifiable fact — that Canada has higher dairy prices because of supply management,” says Taylor, in the interview below. “We now know that that is factually not true.”

The findings are largely based on government data and prices reported in Nielsen’s Fresh Milk Price Report for 2017. This data shows fluid milk prices in Canada, where producers don’t use the rBST hormone, were lower than U.S. milk labeled as “rBST-free” (but not lower than regular milk in the U.S.) 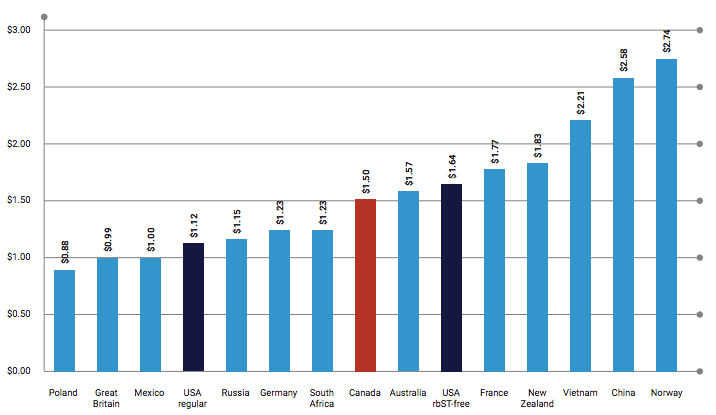 The report suggests Canadian consumers share in benefiting from the absence of volatility in Canada’s supply managed system, “whereas deregulation creates perpetual instability and unpredictability for farmers, processors, retailers and consumers.”

Deregulation in other countries has also led to overproduction and dumping of excess supply, with governments swapping regulation for increased subsidies, says the report. The authors even say Canada should consider a dumping challenge against the U.S., arguing that subsidies and other American government policies (for example, allowing U.S. dairies to rely on undocumented workers) result in export prices below the cost of production.

So who paid for this report? Taylor says the report was not funded by Dairy Farmers of Canada or anyone else affiliated with the dairy industry.

“This report was not commissioned. The entire report was co-authored by myself and my business partner,” he says. “…especially in the context of the Trump administration making aggressive demands of Canada in dairy at the NAFTA negotiating table, we wanted to add some commentary and analysis to that debate. That was our end goal, ultimately, to insert some facts and participate in the debate.”

Listen to Adam Taylor discuss the dairy price study and how Export Action Global came to its conclusions: