Update, as of Wednesday: Both unions have served CP Rail with 72-hour strike notice, clearing the way for a strike to begin after midnight on Saturday morning.

When asked on Tuesday whether the federal government would consider back-to-work legislation, Transport Minister Marc Garneau said he’s following the situation closely: “Remember that we are a party that does believe in a collective bargaining process and this is a natural process that occurs between companies and the Unions and so we’re cognizant of that fact. We’re also cognizant of the fact that this is a situation that does have important implications with respect to the movement of  — not only grain — but all other commodities as well. So we’re following it very closely and we hope that the two sides will negotiate in good faith and work hard at it and not give it up until they find a solution.”

With railways facing a backlog of grain amid strong overall shipping demand, one of Canada’s two national rail companies is warning a tentative strike slated to begin this weekend would “severely impact” its service to customers.

Two unions representing Canadian Pacific employees — the Teamsters Canada Rail Conference, Train & Engine (TCRC) and the International Brotherhood of Electrical Workers (IBEW) — have voted in favour of a work stoppage that could begin as soon as April 21 if new collective bargaining agreements are not reached before then. The strike would include around 3,000 conductors and locomotive engineers represented by the TCRC, as well as 360 signal maintainers who are members in the IBEW.

As of Friday, CP said a “significant gap” remains between the company and the unions.

“We have been working hard with both unions for months, and continue to meet in order to negotiate an agreement that balances the needs of these two unions with the needs of our entire workforce, our customers and our shareholders,” said CP president and CEO Keith Creel. “I made labour outreach my top priority when I became CEO and I continue to focus my efforts on this key area.”

The railway says all customers and commodities would be impacted “at a time when demand is soaring.”

“We have connected with our freight customers and with the CEOs of the passenger rail services that run on our line advising them of the potential impacts,” said Creel.

CP and TCRC leaders negotiated a one-year extension of their collective agreement last September, but that agreement was not ratified by the union’s members. The IBEW has also been working on a new deal with CP since September. 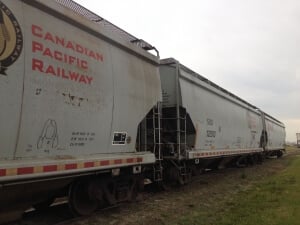 Both unions responded to Creel’s comments over the weekend, with the TCRC saying the railway is “attempting to manufacture a crisis to force government intervention and avoid bargaining with the Teamsters.” CP offered to enter voluntary mediation or arbitration in March, but both unions declined. The TCRC and IBEW argue CP has refused to extend deadlines for conciliation and limited availability for meetings in an attempt to defer the outcome to binding arbitration by a government-appointed arbitrator.

“If CP truly wants to avoid a strike, all they need to do is show up on time at the bargaining table, be prepared to negotiate with the Teamsters, and stop lobbying the government to save them from themselves,” says TCRC president Doug Finnson, in a statement.

“It is fair to say there is a significant gap between the parties and it is questionable to suggest that CP continues to engage in good faith bargaining,” notes IBEW spokesperson Steve Martin.

“The hurdles still remain on collective agreement duration, expenses, company flexibility in hours of service, days off and work/life balance as well as other items,” said Martin in a strike mandate letter to IBEW members last week. “At this time, there is no foreseeable settlement in the near future.”

Further meetings between CP and both the TCRC and the IBEW are supposed to take place this week.

While outperforming CN Rail for most of the current shipping year, CP’s grain car spotting performance has been trending lower, dropping to 53 percent last week, according to the Ag Transport Coalition. (See graphs below. Both railways dispute the ATC data, which is collected from grain shippers.)