Are you willing to change your mind when you discuss agriculture and food issues with people who don’t agree with your point of view?

On some level, most people in agriculture engage in conversations with family, friends, and colleagues on a range of issues – everything from conventional versus organic agriculture, to the right to raise livestock for food, and on to the legitimacy of GMOs. Typically, our goal is to change minds: convert people to our way of thinking, educate them, and convince them that our way of thinking is best.

“It’s a case where we want to change minds, but we don’t want to change our own minds,” says Tamar Haspel, a food and science writer for the Washington Post. But until we open our minds and are willing to engage on a level that allows us to listen and understand opposing points of view, Haspel believes we’ll continue to be disappointed in the conversion rate to our cause. 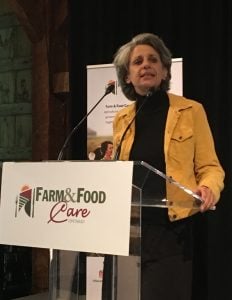 Telling people they’re anti-science “gets you nowhere,” says Tamar Haspel. It’s much better to be respectful and be nice. “Facts don’t persuade people, but if we play our cards right, people persuade people.”

This is one of several messages Haspel shared with about 200 attendees at the Farm & Food Care Ontario annual meeting last week. Haspel, who writes regularly about food supply issues: biotech, pesticides, food additives, organics, nutrition, and food policy in her award-winning column, Unearthed, says “the first step to a better debate is to stop thinking for a while about how to get your message across and to start thinking about where you might be persuadable.”

Haspel says most of us enter into conversations with the mindset that if we just present the facts we will be able to change minds, but that rarely happens. She believes that most people fall victim to confirmation bias and selective use of facts to support their position. And when people don’t agree with our presentation of the facts, we accuse them of being ‘anti-science.’

Telling people they’re anti-science “gets you nowhere,” says Haspel who recommends we drop the term from our vocabulary. She suggests people reach across the aisle, don’t be snarky, and be willing to listen to others when talking about issues.

“Facts don’t persuade people, but if we play our cards right, people persuade people,” says Haspel who notes that successful conversations are really rooted in values – understanding other peoples values and respecting them in the course of a conversation.

In this interview, Haspel shares her tips on having better food and agriculture conversations.

Haspel also tries to be kind. “I try not to malign people who disagree with me because I think that that leaves me more open to the idea that they could be right, and it certainly leads to more fruitful engagements, for example on social media, but also face to face.”