Accountants and business owners concerned about how Ottawa was going to treat passive income received a somewhat pleasant surprise in the 2018 federal budget.

After backpedaling on several major planks of their controversial proposal to change how small businesses are taxed last fall, the Liberals finally shared details on how passive investment income will be treated in Finance Minister Bill Morneau’s budget on February 27th.

The budget unveiled a whole new approach to taxing passive income in corporations. Assuming the budget is adopted, the new rules will also cost business owners, as a whole, less than the Liberals’ original proposal introduced last summer.

“The new plan is much simpler than what was originally proposed, and the government deserves credit for listening to Canadians,” says Bruce Ball, vice-president, tax, with the Chartered Professional Accountants of Canada.

In the context of an incorporated farm, the passive income that the government is referring to can include returns from GICs, mutual funds, stocks, bonds, or rental income from land or buildings that are owned by the corporation.

Under the original proposal published in July, the federal government was looking to apply high tax rates to income coming from passive investments to remove the advantage of investing in a corporation versus investing personally. Withdrawing passive income from a corporation would have triggered high tax rates, as high as 73 percent in some scenarios — one of the main concerns that led to backlash from business owners, including farmers, last fall.

With the new rules proposed in the budget, tax rates assessed directly to passive income are unchanged, but Canadian-controlled private corporations (CCPCs) would gradually lose the ability to access the small business tax rate when annual passive income exceeds $50,000.

In other words, the amount of business income eligible for the small business tax rate shrinks as passive investment income grows.

The current small business deduction limit allows the small business tax rate to be applied to the first $500,000 of business income in most provinces. This small business rate is set at 10 percent for 2018 and will be dropping to 9 percent in 2019, whereas the general corporate rate federally is 15 percent. 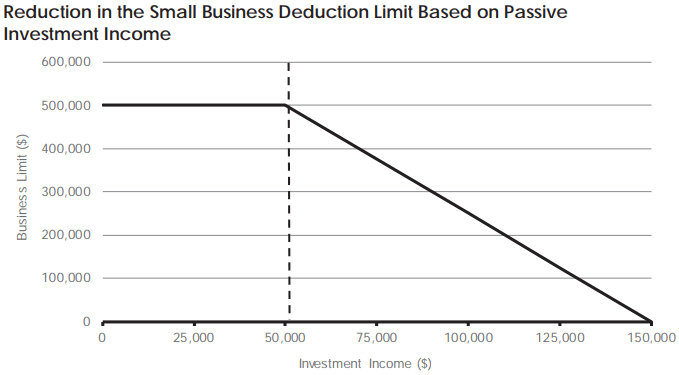 “These measures are substantially less aggressive than the proposals initially put forward in the July 2017 consultation paper, and more beneficial to taxpayers than the proposed relief announced in October 2017,” says accounting firm BDO in its budget analysis.

“This feature of the proposed rules recognizes CCPCs with lower amounts of business income generate less retained earnings that can later be used for reinvestment in the business and may have more difficulty accessing capital,” notes MNP.

When Morneau announced changes to soften the original proposal in October, he said existing investments would be “protected,” meaning accountants would have had to track separate streams of old and new passive income each year. The rules laid out in the budget simplify the accounting by treating future and past passive investments the same.

“The new rules appear to be simpler and may improve things for some business owners from the earlier proposals, but others will lose the benefit of the lower small business rate due to past investments,” notes Dan Kelly, president of the Canadian Federation of Independent Business.

Accountants also weren’t sure when the passive income changes would take effect, and whether business owners would have time to plan accordingly. The budget says the proposed changes would apply to tax years that begin after 2018.

Of course there are details that we can’t get to in a short article like this and every farm is different, so please talk to your accountant or tax professional to get a better idea of how this could impact your business.