Canada’s two major railways supplied less than half of the hopper cars ordered by grain shippers last week, according to data from the Ag Transport Coalition.

The farm group and grain shipper coalition’s weekly report says Canadian National Railway (CN) only supplied 34 percent of cars that were ordered in week 28 of the crop year. Canadian Pacific supplied 69 percent. Together, they supplied 49 percent of ordered cars — some of the lowest order fulfillment numbers since the grain industry started tracking this information after the backlog in 2013-14.

“You don’t need to be a wizard to know what’s going to happen to your cash bid and the need for grain to come into the elevator system if they can’t ship it,” says Dan Mazier, president of Keystone Agricultural Producers in Manitoba.

The entire system is bogged down, with the amount of time cars spend sitting at elevators waiting to be picked up climbing from a “normal” of around 24 hours to four or five days, he notes. “Things are starting to get piled up.”

David Przednowek, CN’s director of marketing for grain, admits “it’s been an extremely challenging month of February here for us. There’s no doubt about that.”

Due to how cold temperatures affect trains’ air brakes, he says CN has been forced to run shorter trains approximately 75 percent of the time this winter. There’s also increased shipping demand for frack sand and intermodal, but Przednowek is adamant that no resources have been moved away from grain to other commodities.

“We’re trying to do everything we can to recover here in what’s been a very challenging past two or three weeks with some of the serious congestion issues that we’ve seen. We’re hopeful, with a better forecast, that we’ll get a break in the weather and that we’re going to be able to deal with that serious backlog of traffic,” he says.

CN also disputes the Ag Transport Coalition’s numbers, saying it can’t reconcile the company’s data with what the coalition’s reports. Przednowek suggests the industry should focus on actual volumes, instead of percentages, for measuring performance, noting CN’s pipeline is capable of supplying 4,000 cars per week in normal winter conditions. “Those are the sorts of numbers we saw through January, but February has definitely been very difficult,” he says. 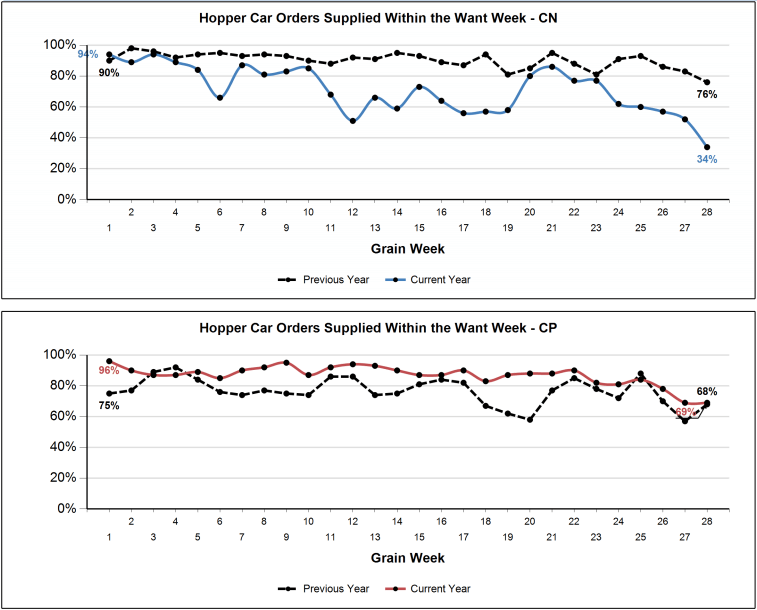 The percentage of ordered cars supplied by CN has dropped in recent weeks, according to data from the Ag Transport Coalition’s weekly report. (click to enlarge)

Meanwhile, farm groups and shippers are urging the Senate to pass the federal government’s proposed transportation legislation. Bill C-49 would give shippers the right to charge reciprocal penalties for sub-par rail service and expanded authority to the Canadian Transportation Agency. Several farm and commodity group representatives testified to the Senate’s transportation committee last week, urging the chamber to approve the legislation as soon as possible.

Mazier believes the bill would also give farm groups the ability to file level of service complaints against railways. In the past, these complaints were generally limited to grain shippers, who were often reluctant to challenge a railway whose service they depended on.

One thing that has changed since the backlog of 2013-14 is the amount of data the grain industry is collecting to measure what’s happening with grain movement.

“I think we have some really hard facts this time around,” says Mazier, who will presenting some of this data when he speaks to the Senate committee on C-49 next week.

He says having a 50/50 chance (based on Ag Transport Coalition data) of an ordered car showing up is unacceptable.

“In 2018, this is how we move grain out of Canada,” says Mazier incredulously, stating a fact which could be interpreted as question. “It’s a pretty disappointing performance, so we have to get that bill passed through the Senate.”

Listen to Dan Mazier discuss the railways’ performance this winter and concerns about the growing backlog. (Both Mazier and David Przednowek will be on RealAg Radio on Tuesday on Rural Radio 147 on SiriusXM at 3pm central. The podcast will be posted here.)