Every year the planning committee behind Edmonton’s renowned FarmTech conference recognizes someone who has made “an outstanding contribution to Alberta’s cropping industry.”

This year’s award recipient is well-known to the agriculture community for his commitment to extension, people, and the industry he loves.

Scott Meers graduated from the University of Alberta with a Bachelor’s Degree in Agriculture in 1982. It wasn’t until twenty years later that he decided to return to post-secondary for a Master’s Degree, receiving it, in Entomology, in 2004 from Montana State University-Bozeman. 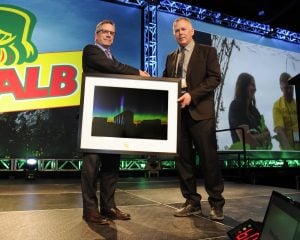 Meers has become an invaluable member in the Government of Alberta’s agricultural staff as the province’s insect management specialist, where his extension efforts range in scope from the podium at agricultural events to a tent full of insects at FarmTech to his ever-vigilant presence on social media.

In 2013, Meers launched #ABbugchat as a way for producers to be involved in a regular discussion around insect surveillance, challenges, and research updates in the province. Insect research technologist Shelley Barkley’s quick moderating skills, shared knowledge, and relevant (incredible) photography, alongside Meers’ commitment and enthusiasm, the chat remains popular today, and is expected to return to screens this growing season.

“You don’t go into a career to win awards, right? I’m kind of driven to help the industry,” Meers says in the video below, adding that it is incredible to receive recognition from your peers.

In this video interview, filmed at FarmTech in Edmonton, insect management specialist Scott Meers joins RealAgriculture’s Shaun Haney following the big award news. The two discuss Meers’ path to entomology, his feelings about the award, and of course, insects to expect in the year ahead.

Editor’s Note: If you have captured one of ‘Alberta’s Most Unwanted’ insects, you find plant damage that looks like Swede midge, or you want to be involved in Alberta’s insect pest monitoring, email [email protected] (the email in the video does not include the dots).

Congratulations to Scott Meers aka @ABbugcounter the recipient of the FarmTech award for 2018 for his outstanding contributions to the agriculture in Alberta. pic.twitter.com/gVz9n2i28b