India’s government made no attempt to veil the reason for imposing tariffs on pulse crop imports in late 2017.

“Cheap imports, if allowed unabated, are likely to adversely affect the interest of the farmers,” said a statement from the Indian government, announcing the 30 percent import duty on lentils and chickpeas in December.

The tariffs on lentils and chickpeas were implemented after a 50 percent import duty was imposed on peas in early November. India also added a non-tariff barrier in the form of fumigation requirements for Canadian pulse crops last fall.

The “interest of farmers” is politically important in India, where it’s estimated 50 percent of the workforce is still employed in agriculture. Farmers have become frustrated with low prices after two years of bumper crops, and there are political reasons for implementing measures to support domestic prices, with several state elections this year and a national election slated for 2019.

It’s left Canada’s pulse industry and growers, for which India is the largest export market, looking for answers: what can be done to motivate India to lift the tariffs and fumigation requirements that also restrict market access? 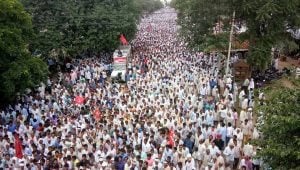 “Our argument is that trade is a very important part in helping India and other countries achieve food security. We have to recognize that imports can play an important role when production is lower or when farmers choose to produce other crops,” explains Carl Potts, executive director of Saskatchewan Pulse Growers.

Potts joins us to discuss the future of pea and lentil demand, both globally and closer to home, with new investment in domestic pea processing capacity, in this Pulse School episode, filmed following SaskPulse’s annual meeting in Saskatoon last week.

“We think imposing things like import duties and fumigation requirements to block trade really amplifies the peaks and valleys, and if we’re trying to work toward more food security, stable and predictable trade is very important,” he says. (continues below)

A market that has historically bought 40 percent of Canada’s exports won’t be replaced overnight, but Potts says there’s opportunity for new demand in China, Canada’s second largest export market, particularly for the use of pulse flours.

There’s also a wave of investment happening in domestic pea processing in Western Canada, including new or proposed facilities announced by Roquette in Manitoba, W.A. Grain in Alberta, and Verdient Foods in Saskatchewan. Altogether, this new capacity could account for 600,000 tonnes of reliable pea demand annually.

As for seeding decisions for 2018, markets analysts have suggested pea and lentil acres could drop by 20-25 percent.

“I think people have to pencil in import duties and the current situation as affecting planting decisions going forward,” says Potts.

Check out the video above for more on the future of pulse crop demand from India and domestic processors.

Related: What do India’s tariffs mean for pulse markets in 2018?