It can be a little disconcerting to see any unrecognized vehicle on your property, especially with regular reports of thefts from rural properties.

People are looking beyond their roads and approaches, to the skies, where unknown, low-flying unmanned aerial vehicles (UAVs), or drones, can also cause apprehension.

So what do we do if we see suspicious aerial activity? 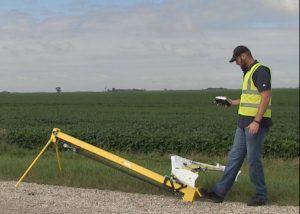 Matt Johnson launching one of his drones.

Johnson says that UAVs may fly over property as part of a job. For example, especially fixed wing drones, like other aircraft, need large turning radiuses, meaning they may need to fly over properties adjacent to the field they are scouting.

And though you can’t take off and land on someone’s private property without written permission, says Johnson, it’s not against the law to fly over private land when when on a job like this if there are no people, animals, buildings or vehicles operating within 100′ of the UAV.

But, operating a drone against the law can have serious consequences. According to Transport Canada, if, for example, someone flies a drone recreationally where they are not allowed, or otherwise breaks the rules outlined in the Interim Order Respecting the Use of Model Aircraft, they could face fines up to $3000.

Likewise, if a UAV is flown without a Special Flight Operations Certificate (which is required if flying a drone for any type of work or research, or if it weighs more than 35kg), the operator may be fined up to $5000, or a corporation up to $25,000.

If aircraft is put at risk, flying occurs where it is not allowed, or an operator endangers someone’s safety, they could not only be subject to a $25,000 fine, but potential jail time.

For specifics around flying over private property, we emailed Transport Canada, and received the following response:

In regards to your inquiry, all operators of UAVs or model aircraft, regardless of the size of the aircraft or the purpose of use, are subject to the Criminal Code and to all provincial, territorial and municipal laws governing privacy and trespassing.

Flying over “home/private property” can be reported to Transport Canada through its Drone incident report form. If you’re worried about the activity of UAVs in your area (now or in the future), take a look at the information required to report, and be prepared to provide details of the incident.

From Transport Canada: rules for non-recreation and recreational UAV use.

To see the original photo used as our feature image, head over to Flickr.