Fans of all ages can’t wait to get their hands on the new Friends of Len album.

This thirteen song recording comes to us from Len Kahn, president of marketing firm Kahntact. When he’s not directing marketing communications for some of agriculture’s leading agribusinesses, Kahn can usually be found sitting behind his drum kit.

A founding member of The GMOs, Kahn has gathered his musical friends to record and produce an eclectic mix of rock and roll, country, blues and even be-bop. From the student pub inspired Aggie Night to the relentless grind of Working for Dirt, the album steamrolls through a collection of original songs co-written with various colleagues and partners, including Owen Roberts, Rob McLean, Jerry Arpa and Brent Rowan. He says, “the songs represent over 15 years of song writing and collaboration that I was finally able to get recorded and produced.” 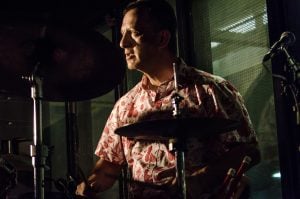 Kahn and his musical friends deliver an eclectic mix of rock and roll, country, blues and even be-bop.

In this interview with RealAgriculture’s Bernard Tobin, Kahn talks about the inspiration behind music and why he’s decided to donate all the proceeds from the album to two autism-related organizations. Kerry’s Place Autism Services provides support to individuals with autism and their families across Ontario. J.O.E. provides jobs and opportunities in Guelph Wellington.

RealAgriculture has teamed up with Kahn to give away 50 copies of Friends of Len. We’ll be asking a series of questions on Facebook, Twitter and Instagram. If you’re one of the first 50 to reply, we’ll send you a copy of the CD for free. Stay tuned!

The album is available both online at iTunes, Spotify, Google Play, Amazon Music and on other digital platforms. Information and purchase options are also posted on Facebook @FriendsofLen. Orders can also be placed directly at [email protected].