For decades, the Ontario Federation of Agriculture has provided pointed advice to provincial politicians seeking to win power in the country’s most populous province.

With a June 2018 provincial election fast approaching, the new strategy will be spearheaded by Currie, who was acclaimed to a second term as OFA president earlier this week at the organization’s annual convention. 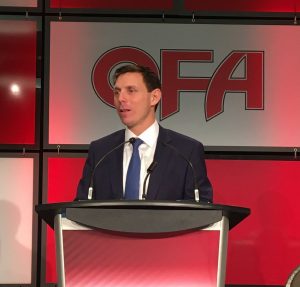 Currie told delegates that OFA’s new ‘Producing Prosperity’ campaign will require investment from provincial governments in infrastructure and services such as broadband internet — but it has an increased focus on how a healthy and prosperous rural Ontario can help government address the challenges of an increasingly urban-dominated province.

In the following interview, Currie explains how the strategy shift has its roots in findings released earlier this year from the federal government’s Advisory Council on Economic Growth, commonly referred to as the Barton Report. It highlighted the significant benefits of investing in agriculture and the agri-food. The federal government has ceased upon the report and Currie feels there is a real opportunity for the provincial government to learn from its findings and invest in rural Ontario.

The OFA convention certainly captured the attention of provincial politicians looking for an opportunity to share their vision for Ontario. Provincial Progressive Conservative leader Patrick Brown, New Democratic leader Andrea Horwath and Green Party leader Mike Schreiner all addressed the convention. The provincial Liberal party was represented by Agriculture, Food and Rural Affairs minister Jeff Leal who flew in from Mexico to address the convention.

Currie says he listened intently to the speeches and was pleased to hear all the politicians already integrating OFA’s ideas into their campaigns.