Construction of Manitoba’s new pea processing plant at Portage la Prairie is on schedule for its planned 2019 startup.

When the plant opens, Roquette will have pea processing capacity of 250,000 metric tonnes worldwide – just over half of that production will come from the Portage la Prairie plant.

Roquette’s decision to build the plant in Manitoba rather than Saskatchewan, where there is a much higher number of pea acres, makes good business sense, says Buch. He notes that Manitoba scored high marks on a number of important factors, including available workforce and competitively priced, reliable and sustainable hydroelectric power, and support from the province and local administration. 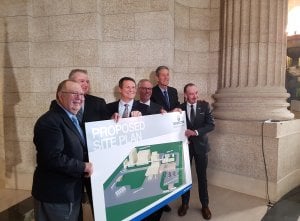 The company operates one other pea processing plant in France and Buch says building the new plant in Canada, where 30 percent of the global pea crop is grown, was a strategic decision. He notes that North America is the fasted growing market for pea protein. “It creates a great business environment with the pea production and the growing market being in close proximity.”

In this interview with RealAgriculture’s Bernard Tobin, Buch says global demand for pea protein is scheduled to double by 2054. That creates tremendous opportunities for both Roquette and Western Canadian pulse growers. Buch says expects to be really busy this winter attending conferences and meeting with growers and other stakeholders to share Roquette’s plans.