Weather events, political drama, and moisture concerns in the Dakotas and Western Canada. They’re all factors that could move the wheat market in 2018.

It’s just a case of where, when and to what extend. In this report from the recent Grain World conference in Winnipeg, Manitoba, Matthew Pot is joined by Rhyl Doyle from Paterson Grain and Tom Ostby from Engelhart Commodities to discuss what it will take to see positive gains in the wheat market.

Ostby says it’s difficult to predict events, but in the near term political events in Saudi Arabia or North Korea could impact the market. There’s also the potential for drought or flooding in a major producing region. When it comes to pricing wheat on events, Ostby says it’s important to consider what is driving the rally.

“In this past year, we saw Chicago wheat futures go up nearly a buck in the course of three days, That was driven in large part by the fund movements. What triggered these was not something that was directly linked to the underlying fundamentals,” says Ostby. 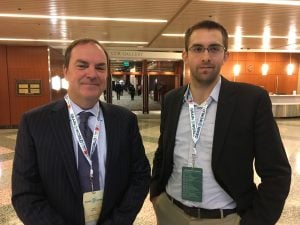 Paterson Grain’s Rhyle Doyle and Tom Ostby from Engelhart Commodities say the wheat market needs a spark to make a move in 2018.

Doyle says spring wheat potential is highly dependent on soil moisture in the Dakotas, Montana and parts of Western Canada. Whether that moisture is replenished could impact the market as could the protein level of the U.S. hard red winter crop.

It will, however, take more than higher protein values to move the market. Doyle says it will take a spark to get funds to cover their short positions. “These always give us a rapid turnaround in the market. We have a lot of wheat around and the Black Sea continues to increase their exports so something has to happen somewhere to take down those burdensome stocks that we’re seeing… particularly at the low end of the market.”