What does the show ring at the World Dairy Expo in Madison, Wisconsin and Liberal tax proposals have in common? Depending on the day and the country, you’ll find 22-year-old Dennis Catt in the middle of both.

“It was very intense and very competitive,” says Catt who grew up on a 50-cow dairy operation near St. Thomas, Ontario. “We did well. It was an awesome experience to compete on the coloured shavings.” 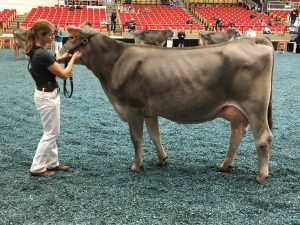 Catt has been a 4-H member since he was 10 and credits his 4-H program, including leadership and speaker training, for helping make his first foray into the world show ring a success. That 4-H experience, along with a degree from the University of Guelph, is also helping Catt tackle the challenges of his new job as a small business advisor for Scotiabank.

Catt hopes to work his way back to the family farm in the future, but for now much of his focus is on trying to understand the impact the Liberal government’s proposed tax changes could have on farms owned by families like his and his agricultural clients.

Since talk of tax changes heated up this summer, Catt has been having daily conversations with farmers concerned about proposed tax reform, which focuses on income splitting, passive investment  and capital gains. In this interview, Catt says he’s hearing a lot of concern from incorporated farmers. Many conversations also touch on the potential for new rules to make it more advantageous to sell the farm rather than transferring it to the next generation.

Catt says larger farmers are also talking about how changes to income splitting could impact their bottom line. This concern is amplified for farmers who may have recently purchased the farm and are maxed out on the amount of debt they can handle. “When all of a sudden you could have to pay twice as much tax, it’s certainly going to be a lot tighter to make those payments,” he says.

Farmers are also grappling with a proposed ‘reasonability test’ on dividends paid and capital gains realized by family members. Income beyond this ‘reasonable’ return would be taxed at the highest rate for the province. “It’s very subjective,” says Catt. He believes it will be very difficult for the Canada Revenue Agency (CRA) to develop a clear and fair definition that will be interpreted consistently by accountants and CRA auditors. “We’ll need a lot more guidelines than we’ve seen in the proposed legislation.”

Catt notes that — as the legislation currently stands — the changes are set to take effect in 2018 so farmers should be talking to their accountants. He adds that every operation will be different, but farmers who will be negatively affected by the proposed legislation should be contacting their member of both the provincial and federal parliaments to tell them of the potential impact.