The president of the African Development Bank Group and former minister of agriculture for Nigeria received the 2017 World Food Prize in Des Moines, Iowa on Thursday.

Akinwumi Adesina has been referred to as “Africa’s Norman Borlaug” for his work in improving African agriculture. The program recognized his efforts to expand agricultural production, thwart corruption in the African fertilizer industry, and exponentially increase the availability of credit for smallholder farmers by convincing banks to invest in African agriculture. (Read more about Adesina’s impact and accomplishments here.)

The World Food Prize is the “highest international honor recognizing the achievements of those who have advanced human development by improving the quality, quantity and availability of food in the world.”

Adesina said he would use the $250,000 that comes with the prize to provide fellowships and grants to young Africans working in agriculture. 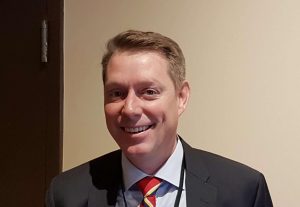 Earlier in the week, Jayson Lusk (@JaysonLusk), food and agriculture economist, author and head of the Purdue University Department of Agricultural Economics, was presented with the Borlaug CAST Communication Award, recognizing his work in “contributing to the advancement of science in the public policy arena.”

Lusk has published more than 190 articles in peer-reviewed journals since 2000, as well as the books “The Food Police: A Well-Fed Manifesto about the Politics of Your Plate” and his latest, “Unnaturally Delicious: How Science and Technology are Serving up Super Foods to Save the World.”

This CAST award, presented by the Council for Agricultural Science and Technology, is dedicated to the memory and life-work of Nobel Peace Prize winner and World Food Prize founder, Dr. Norman E. Borlaug.

Kevin Folta of the University of Florida received the Borlaug CAST Communication Award in 2016.