Members of Parliament are back at their seats for the fall sitting of Parliament, and tensions are high, with the Conservatives and NDP questioning the Liberals’ proposed tax changes announced in July.

Farm groups and farmers have also been vocal in criticizing the government’s plan.

“I don’t think the government realized the opposition that would be starting to be coming together,” says Ron Bonnett, Ontario cow-calf producer and president of the Canadian Federation of Agriculture (CFA).

In August, CFA joined with the Canadian Federation of Independent Business, the Canadian Medical Association, and others to fight the federal government’s proposed tax changes, which mainly affected farms that are incorporated.

Essentially, says Bonnett, the coalition is asking the federal government to slow the entire process down. 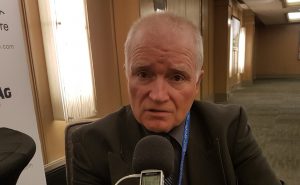 Ron Bonnett speaking with Shaun Haney at the Public Trust Summit in Calgary this week.

Last week, Bonnett met with the Prime Minister’s Office and the finance department to outline some of the key concerns from the agriculture industry. On Monday, a meeting with Minister of Agriculture and Agri-Food Lawrence MacAulay was requested, and scheduled for mid-week.

“There’s a lot of rhetoric around the issue on both sides, but, frankly, I think, from the farm perspective, we’ve gotta protect the tools that are there to allow us to make the investments that are required in our farms, and ensure that there are tools there for an orderly succession of the farms.”

CFA has partnered with a number of other national groups to hire MNP to conduct a comprehensive analysis of the changes. MNP has also been tasked with providing recommendations on possible changes that would minimize the impact on farms.