After hearing Morneau say this, some farmers and small business owners picked up the phone to call the minister, only to get a message saying his voicemail was full. In addition to phone calls, Morneau has been tagged in thousands of tweets and posts online criticizing the changes he has introduced.

As of Tuesday morning, at least one farmer in Saskatchewan has heard back from the finance minister himself. 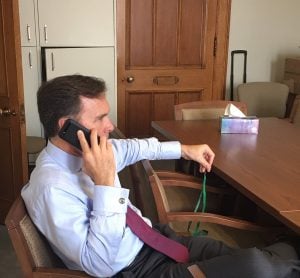 Youzwa has been active, along with many others, in raising concerns about the tax changes on social media. Together with his wife Sandee, he was also interviewed by radio host Charles Adler last week.

After receiving a call from an unknown number and playing some phone tag on Tuesday morning, Youzwa says he had a ten minute conversation with Morneau, expressing his concerns about how the proposed changes would impact inter-generational farm transfers, passive interest, and land rental income, among other things.

Youzwa says the information Morneau told him was contrary to what accountants and tax advisors are telling farmers.

“There’s obviously a huge disconnect. I as a farmer have to rely on what my accountant’s advice is. He’s a professional and that’s what I pay him for. There’s a huge disconnect between what the Department of Finance is spinning and what our accountants are telling us,” says Youzwa.

Yes we did talk and there is a huge disconnect between the Finance Dpt and Accts beliefs ..check out my pinned tweet and #SandeeYouzwa

Terry Youzwa discusses his conversation with the finance minister, and his concerns regarding the tax proposal: