The combination of increased soybean acres and high soybean aphid pressure on the prairies in 2017 has sparked conversations about thresholds, beneficial insects, and how to decide when spraying is warranted.

The economic threshold for soybean aphids in Canada has traditionally been 250 aphids per plant on 80 percent of plants, with the population still increasing, between the early bloom and early seed (R1 to R5) growth stages.

“Growers and agronomists are asking more questions about these numbers because we saw such high numbers in certain areas and so many fields affected,” says Kristen MacMillan, research agronomist with the University of Manitoba. “It’s really good we’re being vigilant about scouting and asking these questions. I think it’s going to bring more awareness to doing a better job of extension on what those numbers are, and how we can use them to make better decisions.” 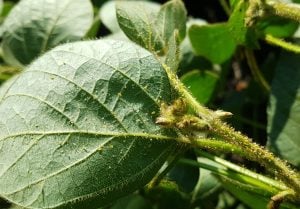 The economic threshold is well below the point where the cost of spraying is equal to the cost of yield loss. The economic injury level is closer to 675 aphids per plant, but the 250-and-increasing threshold was designed to give some lead time — as much as 7-10 days — to respond with the sprayer.

That leaves a window where beneficial insects, such as the ladybird beetle and its larvae, might stop the aphid populations from actually reaching the economic injury level and render the insecticide application unnecessary.

“I think these days farmers and agronomists are so aware of scouting procedures, that week long lag period may be providing too much flexibility, and if we can sharpen in on what the damage boundary or economic injury level is, we might be able to have more flexibility in spraying and perhaps wait a little longer, which might lead to not having to spray,” she says.

MacMillan discusses the lessons learned with soybean aphids in 2017 and the process of deciding when to spray for aphids in this Soybean School video: