It’s hard to say how many injuries occur or work hours are lost on North American farms due to falls while climbing grain bins. They don’t all get reported or talked about, but there are many anecdotal stories of people getting hurt, or narrowly escaping injury. 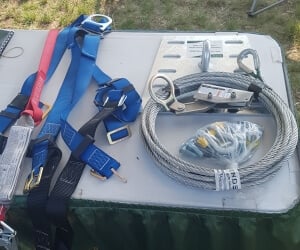 As Northern Strands’ Matthias Rossen demonstrates in the video below, the system features a cable running from the bottom of the vertical ladder to the top of the roof ladder, with a wire rope grab/traveller that moves along the cable while attached to the climber’s harness.

“You have 100 percent tie-off from the bottom to the top and back down again,” he notes.

To start, they’re offering cable mounts for Westeel and Westor 1805 bins, but Rossen says they’re working on mounts that fit other bin designs.

In addition to the reduced injury risk and the financial cost of downtime due to injury, Rossen says producers could potentially see reduced insurance costs if they install fall protection.

Find out more, including info on prices and a demonstration of how the system works, in the video below, filmed at Ag in Motion: