Statistics Canada slashed its estimate for 2017 spring wheat area by almost 900 thousand acres on Thursday, providing further fuel to the fire that’s been the spring wheat market over the last month.

At the same time, serious concerns about the dry conditions and supplies of high quality wheat in the U.S. will likely shift demand north to Canadian wheat, notes Dwight Nichol of DLN AgVentures at Gravelbourg, Sask. 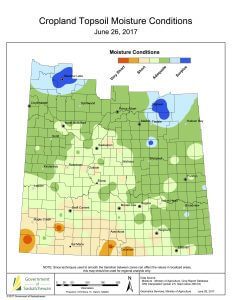 “So now we have increased export potential, decreased acres, and potentially decreased yields — conditions are less than ideal here and we’re coming off a couple of really great years, so I’m looking at a wheat (other than durum) ending stock number at an all-time low,” he says, in the interview below.

The previous low mark was set in 2007/08. That’s when Minneapolis futures spent half a year trading above $10/bu, including the unprecedented spike touching $25/bu in February 2008.

“I hesitate to bring up 2007 because it brings up some pretty dramatic memories, but it is a significant story,” notes Nichol.

The fundamentals definitely support strong spring wheat prices, but you have to wonder how long the aggressive rally we’ve seen over the last month and a half will last.

“While I feel it’s justified, I get a little skeptical when it moves this far this fast, so I’m being a little bit careful,” he says. “Big picture though, there’s definitely reason to believe we’ll achieve much higher average prices this crop year than we did last year.”

Nichol joined us on RealAg Radio on Thursday to discuss the StatsCan acreage report: