The federal government is moving toward establishing a national food policy that will revolve around four “pillars,” but details on what it will look like beyond that have yet to be determined, according to Agriculture Minister Lawrence MacAulay.

The minister launched consultations, including an online survey, on establishing a national food policy in a speech at Ryerson University in Toronto this week.

As MacAulay explains in the interview below, the process will revolve around four themes:

The specifics on how and where it will apply are not yet known.

“We don’t want to cut anything off,” he says, emphasizing the broad scope of stakeholders and government departments involved. 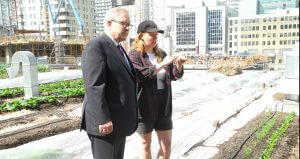 As for the timeline, the government is bringing together experts and stakeholders for a food policy summit in Ottawa June 22 and 23rd. In addition to the online survey, consultations will be held through fall and into winter, says MacAulay, whose ministerial mandate letter from Prime Minister Trudeau calls on him to develop this food policy.

“Hopefully most Members of Parliament on all sides of the House will have roundtables in their ridings. I happen to be the lead minister, which being a farmer, is a privilege, and it will be my job and my department’s job to put this together,” he says. “…we don’t want to put any specific time on it, but we want to get it done and get it in place.”