The unprecedented amount of canola left in the field over winter in Saskatchewan and Alberta has producers and processors trying to figure out the value of this crop.

Very little research has been done previously on the impact of snow and over-wintering on canola quality, says Veronique Barthet, oilseed research scientist at the Canadian Grain Commission.

“We know very little. There’s always one or two fields, but you can’t do research on two fields. So there is nothing that we know exactly, and the other thing is there was a lot of variation this year in environment and in what happened,” she notes in this Canola School episode.

So Barthet is leading a study to determine the end-use functionality and value of canola left in the field, whether it was left standing or in swath and harvested in December or in April. 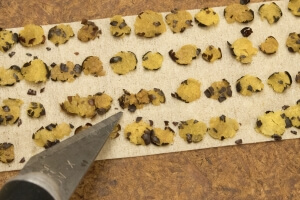 As she explains, moisture activates enzymes in canola seed, and those enzymes degrade the oil, creating what are known as “free fatty acids” or FFAs. That’s the first parameter her lab is looking at.

“It’s like if you make soup, and you put in too much salt, and then because you have too much salt, you have to do something else…that’s what it’s like with the FFAs, at one point it’s not manageable any more,” says Barthet.

While she’s waiting for more samples, there’s been a wide variation in quality so far.

“Some of the samples were pretty good and some were pretty bad,” she says, noting one sample looked good, but inside the seed was an orange-tinged colour. Several samples also arrived full of mould (although they’re not sure whether it was due to the packaging they were shipped in.)

Most of the samples received so far have also been hand-threshed, which Barthet notes might not be representative of samples that have gone through the mechanical threshing of a combine.

Check out the video below to hear her describe what the CGC lab is looking for and what they’re finding so far:

Stay tuned for part two of this conversation on quality issues with canola left in the field, including the problem with leaving a feast for mice in the field all winter.