Globally, the big question in food production – the one that reverberates in any discussion about the future – is who will feed the increasingly hungry world, and how.

Most of the focus is on Africa, and the growing population there.

So the question goes: Who will feed Africa?

Well, after spending two weeks with some 150 agricultural journalists from nearly 60 countries at a well-organized, informative conference visiting South Africa farms and agri-businesses, meeting progressive farmers and seeing the enormous potential that is starting to be realized, one thing is clear to me: to a major extent, Africa will feed Africa.

And specifically, South Africa could be the leader in doing so. It has a solid, well-developed commercial farm base, vast amounts of land, favourable weather most of the time, resourceful farmers, and close proximity to those who are the hungriest

Unfortunately, though, it also has two down sides: water shortages, and president Jacob Zuma.

I’m not sure which is worse.

South Africa is in the third year of a crippling drought. In picturesque Cape Town, at the southern most point of the country, everyone is asked to use every conservation measure possible to help manage the current water crisis. Don’t even run the water when you brush your teeth or shave. And for certain, shower, don’t fill a tub for a bath. It’s dire.

In rural South Africa, farmers and ranchers are waiting anxiously for the southern hemisphere autumn rains to arrive and replenish dangerously low reservoirs. The situation improved over parts of the country in the summer, with record grain yields and very good grazing conditions. But it’s fall there now, and the drought has again taken hold. 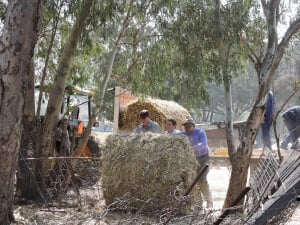 Some blame it on climate change. In response, research at home and abroad, including at the University of Guelph, is targeting the development of drought resistant varieties that will help farmers persevere.

Now if only rain and research could rid the country of president Zuma.

His incompetence and corruption is setting the country back. It’s wrecking the African National Congress, the party founded by anti-apartheid visionary Nelson Mandela, and the dream of a prosperous future for Africa, the Rainbow Nation.

Zuma’s latest folly, firing the country’s popular finance minister, sent South Africa’s currency tumbling. It’s now sunk to junk status on financial markets. Among other things, that means the price of borrowing goes up and credit tightens. When I was there, South Africans were taking to the streets by the thousands to protest Zuma’s rule.

And what a shame. The world was starting to look favourably on Africa overall for investment, which is desperately needed because so little is available domestically. The African Private Equity and Venture Capital Association says private financiers invested $3.8 billion in 145 deals across Africa in 2016, including many in agriculture. That was more than 50% higher than the previous year.

But there’s another twist here when it comes to growth and expansion that puts commercial farmers – many of them managing huge acreages — in a tough spot.

“We’re torn between mechanization and providing jobs,” says farmer Brent Parot, who employs 600 permanent workers and another 2,500 seasonally. “You can’t be sustainable without mechanization. But if we mechanize, we take jobs away from people. Without jobs, they are forced into crime, to feed themselves.” 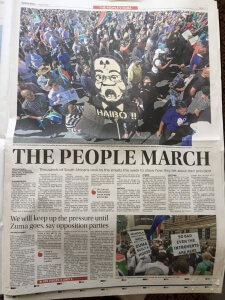 That includes crime against farmers. The instability caused by Zuma is perpetuating conditions that have opened the door for racist factions to terrorize mainly white farmers and bastardize the equality goals of 1994’s Restitution of Land Rights Act. This act was brought forward by Mandela to enable indigenous black South Africans lay claim to parcels of land that were theirs before apartheid ripped the country apart.

In some cases, those claims have gone smoothly. I met one farmer who gave up land through the government-mediated and funded restitution process, and was paid for his land in a month. Going forward, he and others, along with South African agri-businesses, are expected to have formal plans for incorporating more black workers into meaningful positions in their operations. It’s becoming a condition for doing business with the government.

But still, horror stories exist about angry indigenous people simply moving onto farmers’ land and taking it forcefully, whether theirs is a legitimate claim or not. In some cases, these invasions have resulted in murder.

Another serious issue affecting farmers and profitability is livestock theft. Over the past few months, more cases have emerged, especially in the Free State province, where livestock theft resulted in farm attacks on farmers and their workers. Imagine such prospects hanging over your head as you grow your crops and raise your livestock.

All this is made worse by the mainstream media’s negative attitude towards agriculture. Generally speaking, it’s biased against what it considers a very white farm community that has not moved on from apartheid mentality.  Most black farmers are communal farmers; only one commercial farm we visited, the diverse El Passo farm near Cullinan, was owned and run by a black farmer, Brylyne Chitsunge.

Last year, among other measures, Free State Agriculture started hosting what it calls “good news media tours” to show that whites and blacks can work in harmony to produce food, and that commercial farmers care for their workers and local communities.

We saw several examples of such cooperation on our tour, particularly by fruit production giant Dutoit, a family operation that exports apples to Canada, as well as to many other countries. On its farms, black workers hold some management jobs, and all workers’ families receive decent housing, schooling and day care.

However, the good work of Free State Agriculture and others is stymied when the country’s president drives a stake into the heart of his own nation, does nothing to deter racism and turns his back on progress.

The healing that Mandela began cannot continue until that situation changes.