Count pastured chicken production as another frontier for automation and robotics in agriculture. 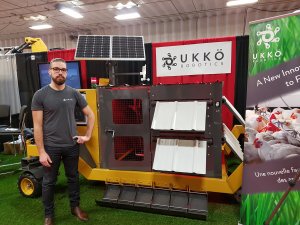 “Every day it will move by itself, and it can all be programmed via smartphone,” he explains in the video below, giving us a tour of his entry in the Inventors’ Showcase at Ag Days in Brandon last month.

Operating on solar power with battery reserves for up to five days, the high-tech chicken coop is equipped with on-board GPS for autonomous movement, a camera that connects to a smartphone for remote monitoring, and storage for seven days worth of feed and water (it will also notify you when feed gets low.)

The flaps on the outside of the coop open and close automatically to control the temperature inside and shelter birds from wind and driving rain, he explains.

“Skis” around the bottom of the coop are designed to keep predators out while allowing the unit to move over uneven terrain. 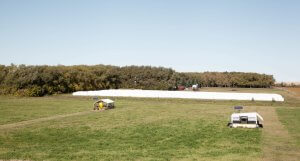 Badiou says his family has been developing and using autonomous chicken coops for three years on their farm — a mixed dairy and grain operation — near Notre Dame de Lourdes. Last year, they raised 400 chickens: “It takes me five to 10 minutes (a day) to raise my chickens,” he says.

The price tag on the smaller model shown in the video is less than $10,000 while the 200-bird coop sells for around $18,000. Badiou also offers the option of renting on a per-year basis.