Manitoba’s new government is planning to remove what it calls “impractical and costly” regulations to make it easier to build barns and farm buildings and bring the province’s farm building code in line with rules in other Western Canadian provinces.

While the changes have been described as a move to revive hog barn construction in the province, he says they go beyond the hog industry. 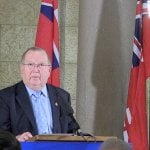 “It’s to put us on a level playing field, so when we’re looking at people wanting to invest in whatever sector, that be the hog sector, the dairy sector, market gardeners, potato guys, they’re competitive on the marketplace. That’s the key thing that drives any investment,” says Eichler in the interview below.

“It’s about stuff like doors swinging out instead of in so animals can’t push them open. Those common sense things,” he says.

KAP president Dan Mazier called it “very good news,” noting regulations have accumulated over the years to the point where red tape is a major barrier for building a barn in Manitoba versus Alberta or Saskatchewan: “They can do things in three months and we’re at three years. It’s that bad.”

“KAP is extremely pleased with this announcement because it will result in a renewal of the livestock industry, allowing producers to build new barns and modernize existing ones,” he said. “We will now become more competitive with producers in other jurisdictions, where building costs for barns are lower because they don’t have this excess regulation. We look forward to working with the province, not only to reduce costs, but also to ensure the safety of farmers, employees and animals.”

Here are some of the main changes being made (which will apply to all farm structures over 600 square metres in size):

Manitoba Ag Minister Ralph Eichler joined us on RealAg Radio on Friday to discuss the building code changes and his government’s engagement with the ag community (there were six cabinet ministers at the KAP event last week):