When it comes to making an impact or contribution to agriculture, there are few who can compare to the “father of canola.”

Dr. Keith Downey, long-time Agriculture Canada scientist in Saskatoon, worked together with Dr. Baldur Stefansson at the University of Manitoba in the early 1970s to develop canola.

As part of SaskCanola’s 25th anniversary celebrations, the organization has introduced an annual “Canola Influencer Award,” and the inaugural award was presented to Downey at SaskCanola’s annual general meeting in Saskatoon this week. 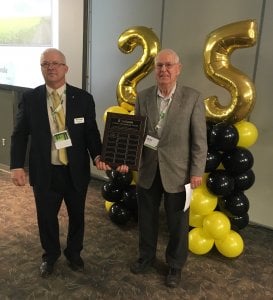 Turning 90 this year, Downey still closely follows what’s happening in the canola world. He spent several days at CropSphere and the Crop Production Show this week, and still helps organize the annual canola industry meeting in Saskatoon that’s been running for 40-plus years.

He sat down with us to discuss and reminisce about the recognition from SaskCanola (SCDC), his contribution to Canadian agriculture and when he realized how big it could be, as well as concerns he has about the future of canola: