The appointees for the second and third highest-ranking roles at the Canadian Grain Commission have been chosen, according to a federal government website. 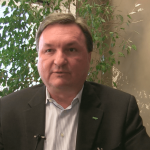 Chorney is the former president of Keystone Agricultural Producers in Manitoba and vice-chair of the Canadian Agricultural Human Resource Council.

McKague is a founding director of the Red Coat Road and Rail shortline and past president of the Canadian Limousin Association. He also ran as the Liberal candidate in the federal riding of Souris-Moose Mountain in 2006.

They will join Canola Council of Canada president Patti Miller, who is leaving the council to become the CGC’s chief commissioner on February 13th.

Chorney and McKague’s appointments also begin on February 13th, according to the Governor in Council site.

Chorney replaces Jim Smolik, whose term ended on November 24th (Smolik has since been named the head of corporate affairs for Cargill in Canada.) McKague replaces Murdoch MacKay, whose time as commissioner ended on December 5th.