Food prices in Canada are forecast to rise between 3 and 5 percent in 2017 — larger than last year’s price increase and higher than what is considered as “acceptable” food inflation, according to the 7th edition of Canada’s Food Price Report.

Led by Sylvain Charlebois, food distribution and policy professor at Dalhousie University, the study offers several reasons for why food prices could jump in the next year, with the two most influential factors being a falling Canadian dollar and year one of the Trump administration: 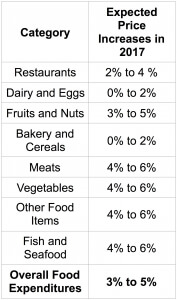 Provincially, Ontario and B.C. are expected to see the largest increases. Alberta, Manitoba, Quebec, New Brunswick and Newfoundland and Labrador are forecast to see below average increases due to weaker economies and/or more competition in food distribution.

According to Charlebois and his colleagues, the “proverbial sweet spot” for food inflation is between 1 and 2 percent per year. “Such a threshold is manageable by all stakeholders and allows the industry to provide higher quality products at an affordable price,” they note.