Seed companies are turning to new sources of resistance to protect canola against blackleg disease, as the pathogen population in Western Canada has adapted over the years.

Until recently, most of the varieties marketed as “blackleg resistant” relied on what’s known as the Rlm3 gene, explains Sakaria Liban, pathologist with DL Seeds, in this episode of Canola School.

“Isolates that can infect this line are being heavily selected for, and so over the last 10 to 15 years the majority of the population has shifted to infect the common resistance that varieties carry,” he says. 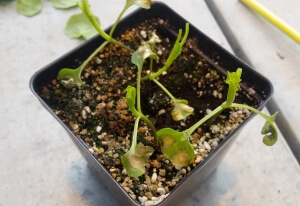 Another canola plant showing susceptibility to the blackleg strain that was applied.

At this point, seed companies are not disclosing information on their sources of resistance, but if varieties could be distinguished by resistance gene, growers could choose varieties that are best-suited to match the blackleg isolates present in their fields, as is the case in Australia.

“Researchers like us have to be able to look at what we have out there in terms of the pathogen population, identify which genes are most effective, and then transfer those into varieties for the marketplace,” says Liban.

Check out the video for more on breeding blackleg resistance, and the links below for more on this topic: