People who watched Wendel Clark during his hockey career remember him best as the heart and soul of the Toronto Maple Leafs.

In our latest RealAg BookClub podcast co-hosts Bernard Tobin and Kelvin Heppner talk hockey and farming with Clark, and learn how his agricultural roots helped make him the competitive, tough, resilient leader that earned the respect of all hockey fans. 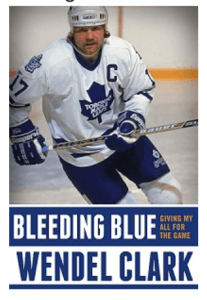 Clark’s new book— Bleeding Blue: Giving My All For The Game — shares how growing up on a Kelvington, Sask., grain and beef farm prepared him for his 15-year National Hockey League career. Like all farmers, Clark remembers the first time he drove a tractor and a combine; he also recalls those long harvest days; and his parents’ tremendous work ethic and dedication – two traits he would draw heavily upon to establish and sustain his hockey career.

In the interview, Clark offers his thoughts on why farming and rural communities like Kelvington turn out a high percentage of high calibre hockey talent. He also comments on how the hockey development experience for young people has changed over the last 30 years and how learning to play the game in rural communities differs from big city apprenticeship.

Our co-hosts also ask the Leafs legend about the highs and lows of his hockey career; the best players he ever played; and the toughest fighter he ever tussled with on skates. Tune in and also find out how old Clark was when he got his first traffic ticket for driving a tractor through town … without a licence.

Like Clark, Bleeding Blue: Giving My All For The Game is all heart. You won’t be disappointed. The book is widely available at local bookstores and online here or here.

Check out episode one of the RealAg Bookclub: Is Gwyneth Paltrow Wrong about Everything?