Will drones or satellites be the way for precision agriculture in the future? Right now it looks like both have a place but debate exists whether that be the case in the future. Planet plans to have a say in how satellites could become the dominant player in imagery for farmers around the world.

At the Bayer Agronomy Summit in Banff last week, Shaun had the chance to interview Andrew Pylypchuk of Planet about their unique satellite technology and how it will drive further evolution in the use of satellites in agriculture.

Planet is designing, building and launching satellites faster than any company or government in history. We use commodity consumer electronics to build highly capable satellites at drastically lower costs. With the most advanced satellites launching into orbit every 3-4 months, our capabilities are on the cutting edge and always advancing. 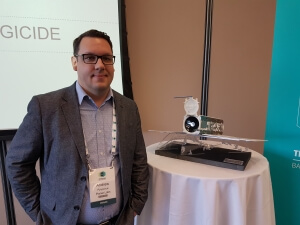 When you think of a constant flow of imagery back to earth through an API, your first question is likely, how much data is a that?  As you will hear in the interview, Planet Labs is downloading 7 terra-bytes per day from its network. Yeah, 7 TB a day! That’s is a lot.

Learn more about Planet and their Agriculture Strategy

With a resolution of 3 meters to the images, the pressure on UAV’s continues as all technologies continue to drive innovation through the quest to provide scalability, accuracy and timeliness.