CN Rail appears to be making a concerted effort to increase its communication and outreach in the grain industry, from taking farm group leaders on a tour to Vancouver recently to adding weekly internal grain shipping stats to its website. The railway also had a significant presence at the Agribition Grain Expo in Regina last week, and joined the Ag More Than Ever campaign.

It probably doesn’t hurt that CN’s grain shipping performance has been “better in the fall period than we can remember seeing them perform,” according Wade Sobkowich, spokesperson for the Western Grain Elevator Association, which represents the main grain companies in Western Canada.

Ag Transport Coalition data, funded by farm groups and grain companies, shows CN has been fulfilling between 88 and 94 percent of weekly grain car orders, while CN’s internal data indicates the company has supplied between 95 and 100 percent of orders in recent weeks (more on this difference below.) 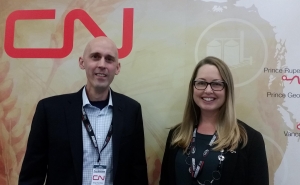 As part of this strategic decision to increase dialogue with shippers and the farm community, CN is also making its employees involved in grain shipping more accessible to the media.

Listen here, and read some of the highlights from our conversation below:

CN’s perspective on how grain has been moving so far this year:

“Overall, very well. We had a very slow start because of the weather in country…but it really picked up in week 7…We’ve noticed some challenges in Vancouver with some weather issues,” says Hamilton.

“We’ve noticed about an 8 percent increase in car velocity compared to last year. So the system is very fluid at this point.”

CN has been meeting its internal “maximum sustainable supply chain capacity” standard of 5,500 cars per week since week 7.

On preparing for the large 2016 crop:

“We heard the ag community speak up about the potential for a large crop and we responded,” says Hamilton, noting they repaired more than 700 hopper cars and brought locomotives out of storage over summer.

“Through the summer months, we had over 5,000 hopper cars parked and stored, not moving. Now we’ve put them all in service.”

On contacting grain companies for more grain in week 14:

“In week 14 in particular, we had the orders come in for the following week, and we noticed we had additional capacity. So rather than store grain cars or have them sit idle, we actually went back to grain companies and approached them, asking if there were more orders they could put in for the next week,” he says. “We’re expecting for the balance of the crop year that ordering will be strong.”

Explaining tweets (as above) saying “CN is meeting 100 percent of contracted car orders.” What does this mean?

“New this year we provided opportunity for grain companies to enter into contracts with reciprocal penalties. These contracts are for customers large and small — as small as 10 cars,” says Hamilton. “That allows them to exercise those contracts throughout the crop year.”

He notes the contracts require CN pay a penalty if it doesn’t provide a contracted car. The shipper pays if they order a car but don’t use it. Approximately 50 percent of orders so far, on a weekly basis, have been for contracted cars. Spot orders make up the rest.

“We have been able to meet, through the first 15 weeks, 100 percent of those contracted orders as they’ve been coming in,” he says.

Has there been an intentional shift in CN’s strategy for communicating with the rest of the grain industry? Maybe lessons learned from the grain shipping backlog of 2013-14?

“Yeah. It really is about learning from the industry,” says Fenske. “We’ve really stepped up communication, and we think communication and collaboration is key to making sure grain does get to market in a timely way … It’s about everyone communicating on a regular basis…about sharing more information.”

On the discrepancy between the Ag Transport Coalition’s rail performance data versus the more complementary internal numbers posted on CN’s website:

“Directionally, the numbers are quite similar, certainly on CN’s performance, but the Ag Transport Coalition report does only capture 90 percent of Western Canadian grain that’s moving. That’s one difference,” notes Hamilton.

The other difference, say Hamilton and Fenske, is CN doesn’t count cancelled orders and it validates each order to ensure it has terminal authorization and legally required shipping info.

“Directionally, I think the Ag Transport Coalition report shows CN is meeting 90-plus percent of orders and that’s consistent with what CN is reporting as well,” he says.

“The reality is extended interswitching actually reduced capacity, because in doing an interswitch…what ends up happening, that railcar will sit at the interchange. It will take extra time to get from CN to CP, and all that extra time being added doesn’t move the grain any faster. In fact it moves it much slower, which is effectively taking capacity out of the system,” says Hamilton.

“We feel the capacity-increasing hope for extended interswitching has not materialized, so we would hope that will be addressed.”

On changes to the maximum revenue entitlement (aka revenue cap) for shipping grain:

“It certainly doesn’t encourage us to make investments that are required,” he says, noting approximately two-thirds of CN’s 11,000 hopper car fleet will reach its maximum age in the next 10 to 20 years. “The way the MRE is currently structured does not provide adequate incentive for the railways to make that investment.”