As canola seed prices have risen, farmers across the prairies have cut back on the amount of seed they’re putting in the ground.

Regardless of whether growers are playing with fire, canola yields are trending higher, making it difficult to argue that the move to lower seeding rates has resulted a widespread yield decline or a situation where many farmers have been burned by the decision — at least so far.

This begs the question: does the industry recommendation need to be lowered?

Not everyone agrees on the answer, as was clear when researchers, agronomists, and producers met in Winnipeg last week for the 2016 Canola Discovery Forum.

Murray Hartman, long-time oilseed specialist for Alberta Agriculture, believes “yes,” the industry-wide recommendation should be lowered in response to the economic reality of higher seed costs.

Lower plant densities would also reflect the updated plant population and yield relationship for hybrid herbicide-tolerant canola genetics, he said during his presentation in Winnipeg. 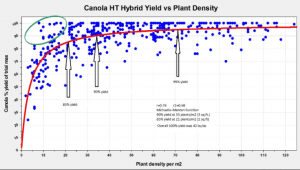 “The data suggests that yield response curve has shifted left. We’re getting to a lower plant density where yields start to drop off,” he said. “I don’t think 7 to 10 is an economic range for producers to target. It should be lower than that.”

Following Hartman’s pitch for lower recommended rates, several researchers promptly stood up and pointed out some of the risks with going to a lower plant population, including reduced weed competition leading to more reliance on herbicides and higher weed resistance pressure.

There are also concerns with timing, as a thinner plant stand will tend to result in less uniform staging for fungicide application and take longer to reach maturity at harvest, raising green seed risk. Frost, flea beetle pressure, and seed-placed fertilizer toxicity are among the factors that also need to be considered if cutting down on seed.

Best seeding rate for canola is not a simple decision – lots of factors involved according to Murray Hartman #cdf16 @SaskCanola pic.twitter.com/OCq8fR9VEX

Hartman suggested the industry develop a calculator or app that takes these risks and multiple other variables into account to provide growers with their own optimal economic seeding rate.

As Jay Whetter, editor of the CanolaWatch agronomy newsletter, notes in the interview below, the Canola Council is sticking with its recommendation of 7 to 10 plants per square foot. They’re concerned about the increased odds of a yield wreck with lower seeding rates.

“There are situations where growers can probably get almost the same yield with four plants per square foot, but we’re not ready to say that yet because there are so many other risks involved,” he says. “Whether our recommendations are due for an upgrade, I’m not going to say that today…”

What the Canola Council agronomy team members I spoke do not want is for growers who have already slashed rates to only hear “it’s okay to lower your seeding rates.” That statement has to be qualified, with the many risk factors considered.

As Hartman noted, the yield response curve to seeding rates may have shifted slightly to the left, but it still drops dangerously fast when you get into the lower plant populations.

We’ll have more on this topic on RealAg, including an upcoming Canola School episode with Murray Hartman discussing seeding rates. Check out the links below for archived discussions about canola seed rates.

Jay Whetter and I chatted about the challenges with harvest and field work this fall, nitrogen fertilizer strategies, and the whole seeding rate conversation in this piece, which aired on RealAg Radio on SiriusXM on Friday: