The Manitoba government is planning to implement a carbon pricing system with the goal of reducing emissions, but what it will look like has yet to be determined.

Unlike her colleague from next-door Saskatchewan, Manitoba’s minister of sustainable development did not walk out of the federal/provincial/territorial environment ministers meeting in protest last week when Prime Minister Justin Trudeau announced a federal carbon pricing requirement by 2018. 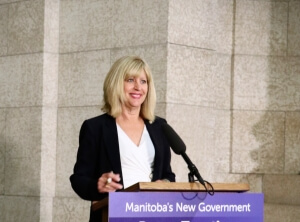 “It’s early days,” she says, in our conversation below. “We just got started and we’ve received clarity now from the federal government. We know we have to move forward, so that’s the next step in the process — more discussions with stakeholders. We want to get it right.”

While the details of this ‘made-in-Manitoba’ approach are still cloudy, one thing is sure: the cap and trade program announced by the previous NDP government is off the table, says Cox.

“I don’t think cap and trade is right for Manitoba. We have very few large emitters, and from what we’ve seen it would have poor environmental outcomes. It’s also a very long and complicated type of approach, so we’re looking at other methods of carbon pricing,” she notes, saying it’s too early to say what those “other methods” might look like.


Acknowledging agriculture’s importance to the Manitoba economy, Cox says she discussed farmers’ concerns about a carbon tax raising the cost of fuel, fertilizer and other inputs used to produce food with her federal counterpart at the meeting in Montreal last week.

Whether that will involve exemptions or compensation for carbon sequestration hasn’t been determined, she says, but the province has also committed to implementing an incentive-based ecological goods and services program based on the Alternative Land Use Services (ALUS) model.

So could an ALUS program be a place where farmers would see incentives or compensation for practices that sequester carbon?

With the federal carbon pricing mandate less than two years away, she says her department will share more information in the next few weeks on how Manitobans can offer input for the ‘made-in-Manitoba’ climate action plan.