It might only be the middle of October, but it looks and feels like winter in parts of Western Canada, especially as you move north and west in Alberta and Saskatchewan.

Snow and freezing rain have left many canola growers with a helpless feeling as crop that was ready to be harvested is now under a blanket of white powder and/or encased in ice.

Fortunately, it is only the middle of October and there’s a chance we could see the return of warmer weather to melt the snow and dry things up.

“We have to hope and assume we will see a return to more seasonal-like weather,” says Angela Brackenreed, harvest specialist on the Canola Council of Canada’s agronomy team, in this episode of Canola School. “In a lot of areas we need the fields to dry out, because practically that’s the biggest hindrance right now, actually being able to cross the field.”

If we don’t see a return to more seasonable weather, harvesting in the snow has been done before, but Brackenreed notes it requires cold temperatures for two main reasons: 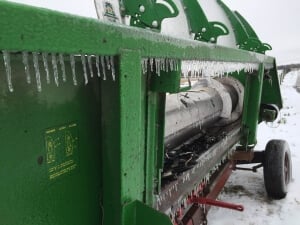 Yields losses due to shattering will probably be an unfortunate reality, she says, but from a quality perspective, the snow and ice won’t have much impact in the short term. However, if left until spring, a build-up of free fatty acids can degrade the oil content and result in downgrading at the elevator.

Check out the video above for more on harvesting canola that’s been snowed or rained on, and watch for a follow-up on managing this high moisture crop in storage.