Goss’s Wilt, a bacterial infection caused by gram positive bacteria, Clavibacter michiganensis subsp. nebraskensis (CMN), is on the move in Manitoba. The disease was first found near Roland in 2009, and in 2015, 35 of 64 corn fields surveyed tested positive.

In this episode of the Corn School, Pratisara Bajracharya of Manitoba Agriculture describes some of the symptoms producers can look for when scouting their fields.

Once the infection becomes systemic, devastating yield losses can occur. And though the province has yet to confirm of a systemic case of the disease, there are some ‘suspect’ cases popping up this year. 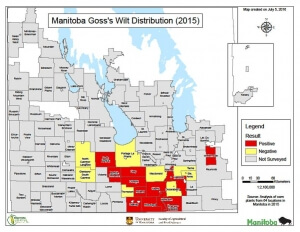 Bajracharya recommends taking steps to mitigate the risk of infection, like using a good crop rotation, managing other hosts of the disease, and planting more tolerant varieties. If producers continue to grow corn in short rotations, she says, the problem will only worsen.