The day when tractors drive themselves on farm fields across North America feels a little bit closer than it did yesterday.

CNH Industrial — the parent company of Case IH and New Holland — became the first of the big tractor manufacturers to publicly unveil its own autonomous unit, lifting the veil on a cabless concept machine at the 2016 Farm Progress Show in Boone, Iowa on Tuesday.

“We just want to know how much interest producers have in these autonomous features, and what else they would like to see from us. It’s not a product launch, by any means. But it could certainly lead to one, or several, down the road,” said Leo Bose, Case’s Advanced Farming Systems (AFS) marketing manager.

The tractor is designed to stop and notify the operator when it senses obstacles in its path, using various radar, LiDAR and camera sensors. 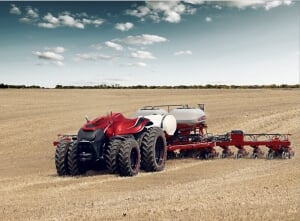 A supplied photo of the autonomous tractor planting in the southeastern US earlier this year.

Built in collaboration with Utah-based Autonomous Solutions Incorporated, the concept unit is based on the Magnum tractor chassis, and capable of producing 419 horsepower, notes Bose.

“An autonomous tractor like this could seamlessly integrate into an existing farm machinery fleet, with minimal operational changes,” he said. “Multiple autonomous vehicles could be put to work in one field or separate fields, on the same tasks or consecutive ones. It could allow a person working with no employees to operate multiple tractors, or could complement very large operations that have challenges finding ample skilled workers.”

Check out the video for more on Case’s autonomous concept machine and the company’s plans for driverless tractors:


Stay tuned for much more from Farm Progress Show ’16.