If the world of soil biology had its own version of Facebook, crops like peas, lentils, corn and flax would be listed as “in a symbiotic relationship” with mycorrhizal fungi. The microscopic organisms help these crops access phosphorus in the soil. Wheat would probably be friends with mycorrhiza, as cereals see some benefit from having the fungi hanging around their roots.

Canola, on the other hand, has no association with mycorrhizae. By definition canola is non-mycorrhizal. To continue with the analogy, they wouldn’t even be Facebook friends.

Since it’s not a host, mycorrhizae levels suffer in fields when canola is grown, explains Mario Tenuta, soil ecologist at the University of Manitoba.

“When we grow crops on stubble of canola, we can have quite a reduced population of the mycorrhizae, which depending on the crop and some other management practices can severely limit early season phosphorus acquisition and compromise yields,” he says, in this Canola School episode filmed at CanolaPalooza ’16 in Portage, Manitoba. 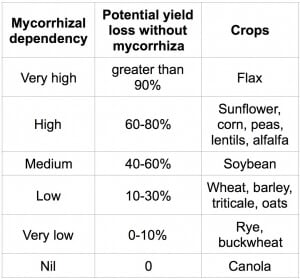 Canola does not rely on or host mycorrhizae fungi, as Mario Tenuta explains in this Canola School video.

To account for the reduced mycorrhizal population, he explains it’s recommended to grow crops that have a low-to-medium dependency after canola, such as cereals or soybeans. A starter application of phosphorus can help a crop overcome the early P deficiency, says Tenuta.

There are also mycorrhizae products that can be applied at seeding to boost the fungi population.

Fallow and tillage will also reduce mycorrhizae levels, so seeding a green manure and shifting to no-till will help maintain the population in the soil, explains Tenuta.