In this inaugural episode of Real Agriculture’s Dairy School, the Portenas’ share the strategy on why they invested in a DeLaval 40-stall herringbone rotary milking parlour, built by Norwell Dairy Systems. The couple and their four children started milking 80 cows in 1997 and over the past 20 years have expanded from a double 6 to a double 12 parlour and will now milk 420 cows in their new rotary.

In this video, Theresa explains how their children now want to get involved in the operation, so the parlour gives the family a good opportunity to expand. It also gives family members greater opportunities to milk cows.

In the double 12, each milking shift took four hours. “It was taking too long,” says Theresa. “We want to shorten the milking so it goes a lot quicker, and for our kids to be more involved. Right now we don’t milk because the shift takes so long and there’s so much other stuff that needs to be done.”

The new rotary will milk between 160 and 200 cows an hour with two people, cutting the time of each shift by almost 50%.

With the family, one full-time employee and a couple of part-timers, the Portenas feel they have the right resources and technology to be more hands-on with milking.

Mike Portena says the rotary also provides room for herd expansion to up to 600 cows. “We could have gone with a smaller rotary, but with future expansion, we thought it would be a smart move.” 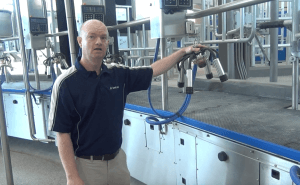 DeLaval’s Steve Shea explains that the armed take-off makes the Portenas’ parlour a one-person machine because the claw is under the cow. It’s held by an arm so there are no slips or fall-offs making it very easy to milk cows.

Mike notes that he considered milking robots but he’s a big fan of parlours. “We like to get the milking done in a fast, efficient way. I’m not the kind of person who wants to fetch cows all day or sit behind a computer. He’s also been keeping a close eye on his brother’s farm where a rotary parlour was built six years ago. “There’s good cow flow, it’s easy on the cows and it loads and unloads quicker than parallel parlours,” he adds.

Also in the video, DeLaval Milking Systems Specialist Steve Shea takes a look at some of the features and benefits of the parlour, noting that the touch screen command centre gives full control of all parlour operations. Using ear tag ID, the display shows every cow in the rotary and sounds a voice alarm when abnormal functions occur during milking. The milking process can also be halted to allow for sorting and separating of cows when they are finished milking.

Shea explains that the DeLaval herringbone rotary is built in Europe and comes standard with galvanized material. The Portenas’ parlour features several stainless steel upgrades, including the rump rail, splash pads and lower skirting for cleanliness and durability.