Coming off record global production last year, world wheat supplies are massive. And yet, growing year-over-year ending stocks have not translated into a major decline in cash wheat bids for Canadian farmers.

The trend toward tighter wheat supplies is expected to continue through the 2016-17 crop year, with domestic demand rationing likely required, Brian Voth of Prairie Farm Consulting explains in this Wheat School episode.

“Currency has definitely been one of the bigger drivers of Canadian grain prices,” he notes. “It certainly cushioned us when prices went down, in terms of cash returns to farmers, but now when futures are going back up, it’s limiting some of our upside potential as well.”

Based on Statistics Canada estimates, ending stocks for 2015-16 are on pace for around 2.6 million tonnes, down from around 6 million tonnes carry-in last summer, thanks to competitive export pricing and lower production, says Voth. 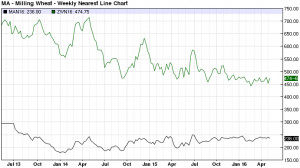 While Chicago wheat futures (in green) have trended lower over the last 3 years, milling wheat futures on the ICE Canada exchange in Winnipeg (in $C) have not (via barchart.com).

“I don’t know if it’s reasonable to expect that for demand for the rest of the year, given where our dollar has moved back to, but nonetheless our carryout has come down again,” he notes.

Looking ahead to 2016-17, StatsCan is projecting a reduction in wheat acres to 17.79 million acres from 18.40 last year. Using a trendline yield for calculations, production in 2016-17 would drop around a million tonnes from last year, says Voth.

“If our carryout was actually to end at 2.6 million tonnes (for 2015-16), we’re just shy of 24 million tonnes of supply for the next crop year. Our demand over the last six years has averaged 23.2 million tonnes,” he explains. “It’s been a long time since we’ve seen a carryout like that…but it shows that demand has to be rationed.”

Whether this will play out likely depends on what happens with the Canadian dollar, and whether Canadian wheat can compete against grain coming from other countries with ample supplies, such as the U.S.

“There is certainly no shortage of wheat globally and it comes down to a price market — who can provide it the cheapest to whoever wants it,” says Voth.

Check out the video above for more on Canadian wheat fundamentals heading into the 2016 growing season.