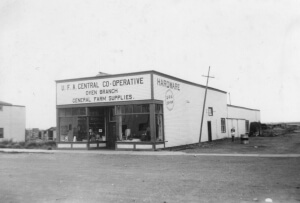 UFA in Oyen, 1947. Photo via the United Farmers Historical Society.

United Farmers of Alberta (UFA) has seen many changes since its 1909 start, with the amalgamation of the Canadian Society for Equity and the Alberta Farmers Association. Today, the co-operative includes more than 100 bulk fuel and petroleum cardlock locations, 35 farm and ranch stores, and 1200 employees.

One thing hasn’t changed though. UFA is still a point of conversation for farmers across the province, though, with the company reporting a loss of $20.3 million for 2015, the discussion isn’t always positive.

In a letter to members on April 25, 2016, UFA acknowledged this loss included one-time asset impairments and provisions.

“Excluding these charges,” the letter read, “UFA operated at or near a break-even level, a reasonable achievement considering the economic environment.”

And perhaps that was the straw that encouraged the camel to seek medical attention.

In 2015, UFA announced a big change. Carol Kitchen, former senior vice-president and general manager of a business unit at Land O’Lakes Inc., was to head the organization as president and CEO.

Kitchen, a certified public accountant, came with an impressive resume, which included extensive work in agriculture.

“I’ve spent almost my whole career in agriculture, in a whole variety of segments — crop inputs, petroleum, retail and feed — and it was a chance to apply all of those skills and the expertise that I’ve built to a new situation in Alberta,” Kitchen told RealAgriculture at the Advancing Women in Agriculture conference.

Kitchen has spent the last year getting to know the company, learning about agriculture on the prairies, and visiting UFA retails and consumers.

“We’re also trying to put some new offers together that are really meaningful in the marketplace, whether it be deferred term and some tank offers — things like that that really reflect who we are as an ag cooperative.”

UFA has also tried to offer a political voice in the province.

“We have been consulting with the minister of agriculture and others on issues around Bill 6,” Kitchen said. “We know that’s important to our members and we want to help them show up in this discussion and have a voice in what’s a very important topic in Alberta.”

Beyond politics, and getting actively involved in the community, UFA has also made some significant business announcements of late, including their partnership with CHS in Bridgeland and Sexsmith. These partnerships, said Kitchen, are about making sure producers have a number of commercial options available.

“We want to be a valid, legitimate partner to producers across the province.”

This interview was recorded at the Advancing Women in Agriculture conference in Calgary.