Granular phosphorus fertilizer recovered from liquid hog manure could be a viable alternative to traditional 11-52 monoammonium phosphate (MAP) fertilizer for growing wheat and canola, according to research done at the University of Manitoba.

Struvite “looks like a fantastic fertilizer,” says Don Flaten, U of M soil scientist and one of the authors of a research paper on the effects of struvite on canola and wheat yields. The study, led by the U of M’s Francis Zvomuya, was published in the Soil Science Society of America Journal this past winter (click here to read it).

The study showed struvite from hog manure “can supply sufficient P to sustain yields and P use efficiency matching or exceeding those for MAP.” Due to its lower solubility, struvite is considered a slow-release fertilizer. Flaten notes producers may also be able to increase seed-row placement of phosphorus in struvite form without the salt toxicity caused by MAP. (continues below)


While research showed it could work agronomically, Zvomuya, Flaten and their colleagues are also excited about struvite for environmental and manure management reasons.

“It’s benefiting environmentally in a situation where a livestock producer has more phosphorus than what they can handle,” explains Flaten in the video above.

The paper points out hog manure generally has a nitrogen-to-phosphorus ratio of 2:1-4:1, while crops tend to require a ratio of 4:1-7:1. To meet the nitrogen needs of a crop, producers have historically applied more P than the crop needed. However, with excess phosphorus threatening water quality, regulations in many areas now limit manure application to meeting the crop’s P needs. 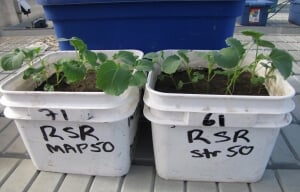 A side by side comparison of canola plants fertilized with 50 lb/a struvite versus monoammonium phosphate in the Orthic Black Chernozem soil.

Since hog manure is mostly water, concentrating the phosphorus would increase the economic hauling distance to areas with low soil phosphorus levels.

“The fertilizer plant in Edmonton where Agrium makes fertilizer for Western Canada is getting its rock phosphorus all the way from North Africa,” notes Flaten. “The international trade and transportation of nutrients is something that’s easily done as long as you have a form of the nutrient that’s concentrated enough to make it worthwhile.”

There’s also a finite supply of rock-based phosphate that most North American farmers currently rely on, leading researchers to look at alternative sources.

These environmental and manure management benefits, the research paper notes, could potentially offset the costs of producing struvite.