The Canadian dollar could be settling in for some quieter time after a wild ride over the last year.

In May 2015, the loonie traded at over 83 cents US. It then went for a slide, bottoming out in mid-January at around 68 cents before rallying aggressively, touching 80 cents in early May.

The dollar has since retreated down to around 77 cents, likely moving into a traditional, smaller trading range, while drifting lower, says Jon Driedger, risk management portfolio manager with FarmLink Marketing Solutions.

“As we weigh some of the tectonic plates shifting around out there, I think maybe a bit of a sideways, softer tone would be how we view the Canadian dollar going forward,” he explains in the interview below.

Much of the loonie’s movement has been negatively correlated with the US dollar index, which trended lower starting in January, but has recently rebounded. 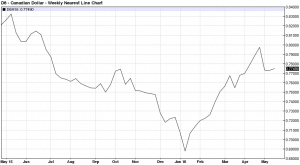 The relative strength of the US economy versus Canada’s, and the likelihood that American interest rates will rise before the Bank of Canada raises rates, lead Driedger to bet that a move lower has the highest odds.

Whether selling wheat or feeder cattle, he notes a calmer currency market would be welcomed.

“In a lot of cases businesses can handle shifts in currency when it’s orderly and over time. But when it happens aggressively, it doesn’t matter what your business is, it just makes it a lot more difficult to adjust to those shifting winds.”

Driedger joins RealAg’s Shaun Haney to play some currency roulette and discuss what’s driving the value of the loonie, how the tragedy in Fort McMurray affects the “petro-dollar” and more — listen to the audio above, or through your podcast app using the links below.