Body condition scoring (BCS) is not a new tool to the livestock industry, by any stretch, but like so many other management indicators, it continues to evolve.

In the last decade, researchers have learned that cows have a genetically determined “set point,” something they refer to as “Target BCS.” According to research conducted in 2007 by the University of Nottingham’s Phil Garnsworthy, this Target BCS is the size animals will strive to return to somewhere between 10 and 20 weeks into lactation. For high-producing Holstein cows, Garnsworthy’s research suggested this score to be between 2.0 and 2.5 on the 5-point scale.

And that may come as a surprise to dairy farmers who aim for a higher BCS, the University of Illinois’ James Drackley told RealAgriculture’s Debra Murphy shortly before his presentation on the topic at the Western Canadian Dairy Seminar in Red Deer.

“As we’ve been selecting for higher milk and higher milk protein production, we’re selecting a leaner cow. And those of us getting up in age maybe don’t adjust our expectations to what that cow should look like now.”

And though animals have a target BCS to return to, there can be significant problems associated with one that’s too high or too low going into calving. 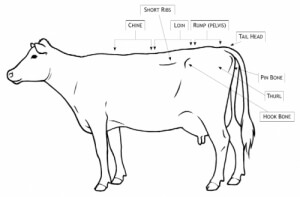 Illustration of a Dairy Cow with a BCS score of 3, via NFACC.

For obese dairy animals, Drackley found that the rapid loss of body fat post-calving increases the risk of fatty liver and ketosis. Others have associated problems like dystocia, retained placenta, metritis, hypocalcemia, mastitis, milk fever, lameness and decreased fertility with cows that go into calving with too high a BCS. In laymen’s terms, they struggle with “fat cow syndrome.”

Thin cows, on the other hand, may be more susceptible to disease, the elements, and may have prolonged postpartum anestrus.

Experts used to recommend aiming for a BCS of 3.5-4.0 at calving, but that seems to be changing.

“For most North American Holstein cows, BCS at calving should not be greater than 3.0,” Drackley wrote in his take-home article entitled “The Importance of BCS Management to Cow Welfare, Performance and Fertility.”