There will be more pulses (surprise!), barley, corn and durum planted on Canadian farms in 2016, according to StatsCan’s acreage estimates published on Thursday.

The canola acreage number was likely the largest surprise in the report, coming in below trade expectations at 19.3 million acres, down from 20.1 million in 2015. (see numbers below)

“I think there’s quite a bit of consensus that we’ll see a higher canola number by the time all is said and done,” says Jon Driedger of FarmLink Marketing Solutions, discussing the StatsCan report in the interview below.

The wheat estimates were largely in line with pre-report guesses, with the exception of durum, which was higher than expected at 6.1 million. All-wheat (including remaining winter wheat) acres are projected to reach 23.8 million.

As talked about all winter, lentil and pea acres are forecast to climb dramatically, with lentils up 30 percent and peas covering 16 percent more acres, according to StatsCan.

“There’s been every market signal in the world for farmers to plant as many lentils and peas as they can,” notes Driedger.

Corn acres are expected to increase by around 6 percent to 3.5 million, while national soybean acreage is forecast to decline slightly to 5.3 million. Manitoba farmers intend to plant more soybeans again, reaching the 1.5 million mark.

Acres for many specialty crops are projected to decline, including flax, down 32 percent to 1.1 million acres. 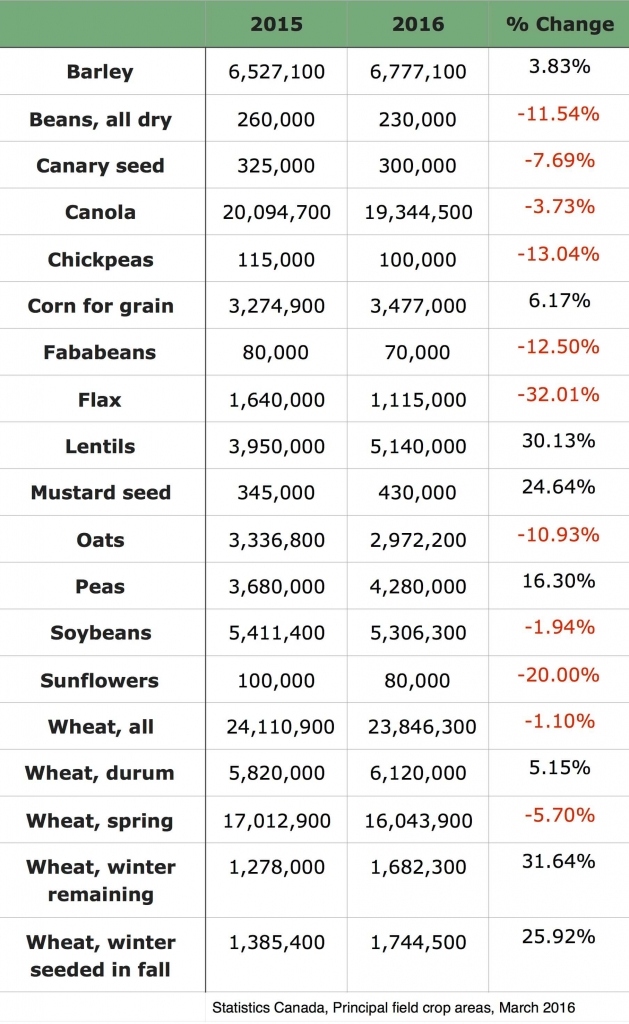