When Terpstra and three other dairy producers took to the stage at the 2016 Canadian Dairy XPO to share their experiences with robot milking, all four seemed to be singing from the same songbook. Improved cow health, increased production, better cow comfort and more management flexibility were familiar refrains in the 90-minute presentation. 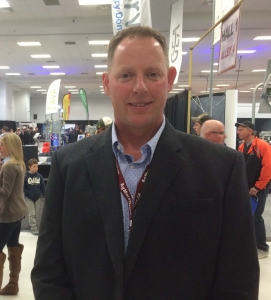 Terpstra notes that his fellow panelists Chris Frizzell, Jack Danen and Frank Louwagie all milk with “different colour robots, but we all had the same goals and the same experiences. We basically had the same results with different robots.”

Terpstra milks 300 cows with six DeLaval robots. He made the switch in July 2014. “Our labour was getting a little thin. We went years and years with really good high school help, but then it seemed to dry up in our area.”

For Terpstra, robots were an obvious solution.

When he made the switch, Terpstra worried about how the cows would adapt, but he says the animals never missed a beat.

“We were worried at first that we would have trouble training cows, but once they get a taste of that pellet (feed) they know what it’s there for and they come in no problem.”

For Terpstra, there’s no going back. He has expansion in mind. “When we built our barn, we built two empty spaces (for robots). We have 500 free stalls in our barn that I hope to fill some day.”