You may have grappled with the some of the questions above. But most farmers have not dedicated much time to pondering how many minutes in a day they should devote to telling their stories, and how to do it.

However, with increasing emphasis on the need to better communicate with the public, some discussion about the time required to do so, and the approach, is warranted.

I tackled this recently in a communications mini-workshop with the new University of Guelph 4H club, called 4H on Campus. The club was wrapping up its first semester in existence, and president Julia Romagnoli — who also presided over a very successful College Royal this academic year — invited me to lead a discussion about communicating with the public.

The 4H students didn’t need to be told about the importance of reaching out. They’re past that, and by virtue of being involved in this 4H club, they want to help take a leadership position in the industry.

And for some farmers, external communications is already a part of farm management. For example, look at what Ontario dairy farmer Andrew Campbell did with his #farm365 project, posting something every day on social media about his farming activity, being very public about it, and last week being recognized for his efforts with an award and standing ovation by Farm and Food Care annual meeting attendees. 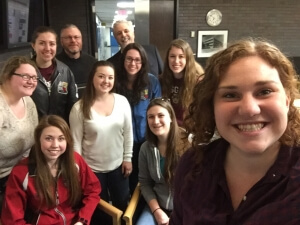 Selfie! The University of Guelph 4H Club poses for a group photo.

I’ve seen some kickback recently from those who think the tell-your-story movement is failing to acknowledge the work they’ve already done. And yes, farmers have long told stories about their farms, and have always had an interest in the media.

But now we’re talking about proactive communications, like Campbell’s — about not waiting for someone else to come to you for a story, a comment or a reaction, but rather, about getting ahead of the headlines and letting someone else react if necessary to your story, instead of vice versa.

So, with the students, we tried to figure out how much time a modern farmer with an eye towards public education should plan on dedicating, to helping consumers understand what’s going on down the lane.

What’s reasonable? Well, that’s likely the foundation of a Master’s degree for some student in the future.

But the discussion needs to starts with an idea of how much time farmers spend farming. The 4H club members figured 60-plus hours per week was about right. That gels with a US survey in late 2013 of 1,600 farmers and ranchers, which showed three-quarters of them spend more than 10 hours a day on farm work, a total of 70 hours per week. Some dated research in Canada from 10 years ago and more showed farm couples on large farms estimated spending 100 hours a week farming (plus off-farm work), but didn’t break it down by individuals.

Anyway, to make the math simple, we used 60 hours a week for our discussion. Then, the question arose about how much time of that time should, or could, go to communicating.

It was an arbitrary figure, but it was revealing — that kind of a commitment would amount to less than a half-hour per day.

What could you do with that kind time? Well, you could simply report on what you’re doing in the field or barn at that time, which is what people want and need to understand. You could update a blog or a Facebook page. You could fire off tweets, post some Instagram photos, or make a Snapchat video. Maybe you’re already communicating in some of these ways without really considering them communications management. But they are. 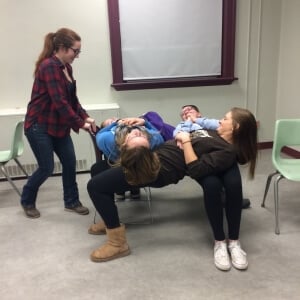 Members of the U of M 4H club attempt “The Human Crab,” an activity where participants have to see how far they can “walk” as a team. Games like this stress the importance of communication.

Anyway, the figures we discussed at this club meeting were somewhat random, and our approaches were based on about a 90-minute discussion, before the students had to head off for night class. But it got the wheels turning. Communications is a commitment, but it doesn’t have to be overwhelming.

Guelph’s 4H on Campus club was developed in conjunction with 4H Ontario. Club advisor Prof. Andy Robinson, Dept. of Animal Biosciences, says it was designed for flexibility, to let students pursue their interests and take advantage of the unique opportunities they have on campus that they may not have in their home county 4H programs. Club members can weave some projects into an experiential education course, too.

This is the second such 4H club I’m aware of on a Canadian campus. The University of Manitoba 4-H Future Leaders Club has just completed its third year, with 13 energized students. Club advisor Marlene Baskerville says the U of M group is highly focussed on leadership and communications, and is considered co-curricular with the university. Members will have 4-H included on their university transcripts.

It’s invigorating to see communications discussions taking place with university students in a 4H club environment. Some of these club members are destined to be agricultural industry leaders at the highest level.

And how much time will they budget for communications then?